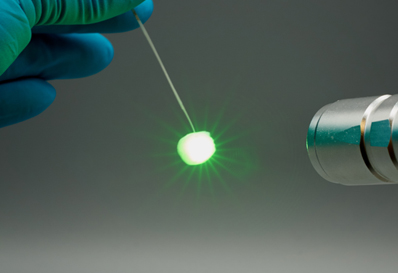 Aerobornitride scatters a laser beam homogeneously in all directions.

With a porosity of 99.99 %, the material, described as a “solid fog”, consists practically only of air, making it one of the lightest materials in the world. Aerobornitride is the name of the material developed by the Kiel-led group. The scientists say they assume that they have created “a central basis for bringing laser light into a broad application range”.

Based on a boron-nitrogen compound, this three-dimensional nanostructure scatters light very strongly while hardly absorbing it. Irradiated with a laser, the new material emits uniform lighting, which, depending on the type of laser, is much more efficient and powerful than LED light, says the group. Thus, lamps for car headlights, projectors or room lighting with laser light could become smaller and brighter in the future.

The research team presents their results in Nature Communications (March 18 issue). The project is part of the Europe-wide research initiative Graphene Flagship, which involves around 150 research groups from science and industry sectors in 23 countries.

Researcher Dr. Fabian Schütt emphasized the potential of thsio development, “Laser light has long been considered the next generation of light sources that could exceed the efficiency of LEDs. For applications needing high brightness or a lot of light, you need a large number of LEDs and thus space. But the same amount of light could also be obtained with a single laser diode that is one-thousandth smaller.”

Schütt, a materials scientist from the Functional Nanomaterials working group at Kiel University is the first author of the study, which involves other researchers from Germany, UK, Italy, Denmark and South Korea.

He added, “Powerful small light sources allow numerous applications. The first test applications, such as in car headlights, are already available, but laser lamps have not yet become widely accepted.

“On the one hand, this is due to the intense, directed light of the laser diodes. On the other hand, the light consists of only one wavelength, so it is monochromatic. This leads to an unpleasant flickering when a laser beam hits a surface and is reflected there.” 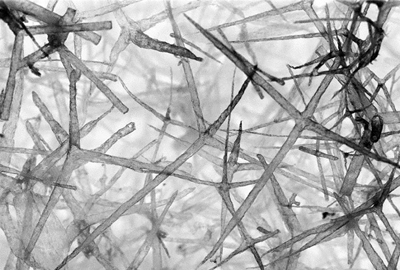 The "solid fog" network of hollow tubes measure only a few micrometers in size.

Professor Rainer Adelung, head of the working group, commented, “Previous developments to laser light normally work with phosphors. However, they produce a relatively cold light, are not stable in the long term and are not very efficient.”

The research team in Kiel is taking a different approach: they developed a highly scattering nanostructure of hexagonal boron nitride, also known as "white graphene", which absorbs almost no light.

The structure consists of a filigree network of countless fine hollow microtubes. When a laser beam hits these, it is extremely scattered inside the network structure, creating a homogeneous light source.

"Our material acts more or less like an artificial fog that produces a uniform, pleasant light output," explained Schütt. The strong scattering also contributes to the fact that the disturbing flickering is no longer visible to the human eye.

The nanostructure not only ensures that the material withstands the intense laser light, but can also scatter different wavelengths. Red, green and blue laser light can be mixed in order to create specific color effects in addition to normal white - for example, for use in innovative room lighting.

Here, extremely lightweight laser diodes could lead to completely new design concepts in the future. "However, in order to compete with LEDs in the future, the efficiency of laser diodes must be improved as well," said Schütt. The research team is now looking for industrial partners to take the step from the laboratory to applications.