University of Utah enhances depth of focus through nanostructures on the lens surface. 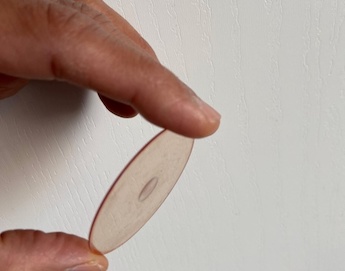 A flat lens that allows a camera's focus to be maintained for objects separated by distances of up to six meters could offer benefits to smartphones and mobile devices, including the potential removal of complex focusing mechanisms altogether.

Developed at the University of Utah, the new lens uses nanostructures patterned on a flat surface to control the way that light is focused. The work was published in Optica.

"Our flat lenses can drastically reduce the weight, complexity and cost of cameras and other imaging systems, while increasing their functionality," said team leader Rajesh Menon from the University of Utah. "Such optics could enable thinner smartphone cameras, improved and smaller cameras for biomedical imaging such as endoscopy, and more compact cameras for automobiles."

The project's multi-level diffractive lens (MDL) was constructed by creating ring patterns of photoresist film on top of a flat 0.6-millimeter-thick glass wafer substrate, modulating the writing beam so as to control the height and distribution of the resulting surface structures.

The team found that controlling the distribution of heights in the constituent ring patterns could then effectively maximize the focusing efficiency of the MDL. In trials using a design constrained to a ring width of 3 microns and a maximum of 100 height levels up to 2.6 microns in size, the MDL was illuminated with 850-nanometer light and produced a beam that remained focused from 5 to 1200 millimeters away.

In imaging trials using the same component as the lens in a camera set-up, the MDL proved able to focus objects at distances from 200-millimeters to around 6 meters away from the lens.

Expressed as "enhancement in depth of focus," a parameter relating the focusing range to the numerical aperture of the optical system being used, the new lens achieved an enhancement of four orders of magnitude, said by the team to be several orders of magnitude larger than anything demonstrated before. Such an extreme-depth-of-focus (ExDOF) MDL could be valuable in a number of different imaging and vision scenarios.

"The new lens eliminates the need for focusing and allows any camera to keep all the objects in focus simultaneously," said Menon. "Conventional cameras also use multiple lenses to keep different colors of light in focus simultaneously. Since our design is very general, we can also use it to create a single flat lens that focuses all colors of light, drastically simplifying cameras even further."

The same design approach could now allow entirely new types of planar optics with large bandwidths and large DOF to be designed, and the project plans to investigate how to create optical components combining extreme bandwidth and lower cost.

In particular, having demonstrated the new lens using infrared light and relatively low numerical aperture, the project plans to extend the lens to larger numerical apertures and to use it with the full visible light spectrum. Work to ensure that the lenses could be mass manufactured is also planned, to assess if they can be commercialized.

This new lens could then have many applications outside photography, such as creating the highly efficient illumination needed by LIDAR, increasingly critical technology for autonomous systems and self-driving cars.

"In stark contrast to what is taught in optics textbooks, our research has shown that there is more than one way that light transmission is affected by an ideal lens, a concept known as pupil function," said Menon.

"This opened essentially infinite possibilities for the lens pupil function, and we searched through these possibilities for one that achieved an extreme depth of focus. Our research is a good example of how abandoning traditional notions can enable devices previously considered impossible. It serves as a good reminder to question dictates from the past."