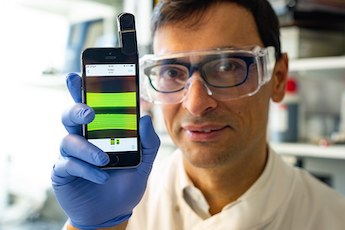 A project at the University of Bath's Centre for Biosensors Bioelectronics and Biodevices has developed a smartphone-based test for E. coli that could potentially assist with the rapid detection of the bacteria in urine.

The project team believes that its technique could reveal the presence of E. coli in 25 minutes, said to be considerably faster than existing test methods for urinary tract infection (UTI).

In addition, the portable nature of the smartphone platform and the lower cost of the overall test should allow it to be adopted in developing nations and other low-resource settings. The research was published in Biosensors and Bioelectronics.

"The test is small and portable, so it has major potential for use in primary care settings and in developing countries," commented Nuno Reis from the University of Bath.

"Currently, bacterial infections in UTI are confirmed via microbiological testing of a urine sample. That is accurate, but time-consuming, taking several days. We hope that giving medical professionals the ability to quickly rule in or rule out certain conditions will allow them to treat patients more quickly and help them make better decisions about the prescription of antibiotics."

The test is carried out by passing a urine sample over a ridged plastic micro-capillary strip, containing an immobilizing antibody able to recognize E. coli bacterial cells. If E. coli is present in the sample, antibodies in the reagents will bind with it, stopping it from passing through the section of plastic strip. An enzyme is added that causes a change in color that can be picked up by a smartphone camera.

The system also measures the concentration of E. coli in the sample by analyzing an image taken by the phone's camera. The procedure could be manually operated or fully automated without any need for a mains power supply.

In trials using a synthetic urine fluid, the technique demonstrated a detection limit of up to 240 CFU (or colony-forming units, a measure of viable bacteria) per milliliter.

Cut-offs for detection of UTI are around 103 to 105 CFU/mL, according to the project team. Replicas of full-response analysis at these levels of E. coli in the synthetic urine yielded recovery values, assay reproducibility and precision similar to high-performance automated immunoassays.

Developments in microfluidics and the ability to manipulate small volumes of fluid through channels only tens to hundreds of microns in diameter can play a significant role in the detection of contaminants in a number of real-world scenarios, and the Bath project indicated that its success was largely due to the design of microfluidic system employed.

"The unrivaled limit of detection was mainly linked to the 'open fluidics' nature of the 10-bore microfluidic strips used, that enabled passing a large volume of sample through the microcapillaries coated with capture antibody," noted the project in its published paper.

"The new smartphone based test has the potential of being as a rapid, point-of-care test for rule-in of E. coli infections that are responsible for around 80 percent of UTIs, helping to stop the over-prescription of antibiotics and the monitoring of patients with other symptomatic communicable diseases caused by E. coli at global scale."

Future work for the project will include a move to clinical trials, and collaboration with clinical and commercial partners. The team will also begin working on refining the test to allow for the detection of other bacteria and their concentrations.

"The smartphone solves one of the biggest problems of the decentralizing of diagnostics, because their capabilities are actually very sophisticated in certain conditions," commented Nuno Reis. "They offer the same functionality as sophisticated scanners that have until now been available only in labs."