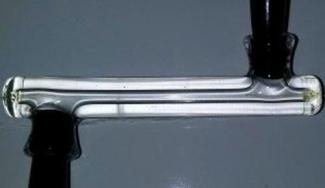 The presence of E. coli in contaminated food and water poses severe health risks to children and the elderly in many parts of the world.

Fiber-optic biosensors are attractive tools for detecting the bacteria and other harmful species, by measuring the effects of those impurities and contaminants on light propagation through a fiber-optic grating.

However, the sensitivity of these sensors to external temperature has been one of the primary sources of error in any measurement, interfering with the successful application of the technology.

Now a collaboration between the Photonics Research Center at the University of Quebec and the Indian Institute of Technology Kanpur (IITK) has produced a new sensor able to quickly and accurately detect E.coli over a wide temperature range. The work was published in Optics Letters.

"Using currently available technologies, which are mostly based on amplification of the sample, it takes several hours to days to detect the presence of bacteria," said Saurabh Mani Tripathi of IITK. "A fast and accurate detection alternative is, therefore, preferable over the existing technology."

Temperature sensitivity in existing probes stems mainly from changes to the refractive index of both the bio-chemical samples and the waveguide regions of the fiber-optic sensor as the temperature alters.

The project team had previously investigated a possible solution, by using concatenated long-period fiber gratings (LPFG) with an appropriate inter-grating space between them. This arrangement made some of the sensor's resonance wavelengths temperature insensitive, but the inter-grating space was impractically long - some 20 centimeters.

Faster response times
In the new version, the concatenated gratings were modified so as to cause selective excitation of two cladding modes - intensity distributions not restricted to the regions around the fiber core - which had opposite light dispersion characteristics. Generation of these modes in the sensor was found to effectively compensate for the phase changes induced by temperature alterations.

The result was a nominal temperature sensitivity of around 1.25 picometers per degree centigrade, which the team's OL paper notes could be further reduced by adjusting the LPFG lengths. The overall length of the sensor is 3.6 centimeters, making it ideally suitable for bio-sensing applications in real-world scenarios.

Testing the sensors ability to detect E. coli while the temperature was varied between 24 and 40 centigrade revealed that in practice the temperature-induced spectral shift was 0.1 nm over that range - a much smaller variation than traditional sensors show under the same conditions, and with the results delivered in a shorter testing period.

This design principle could now lead to other temperature-insensitive fiber-optic devices based on long-period gratings, for use across a number of sectors. The project group is currently collaborating with Canadian company Security & Protection International, to explore commercialization of their device. The ultimate hope is that the technology might facilitate delivery of portable units costing a few thousand dollars.

"Pathogenic bacterial infection is one of the biggest causes of death, and a fast response time is much needed for timely detection and subsequent cure of bacterial infection," Tripathi said. "I'm excited by the very low time our sensor needs to accurately detect the presence of E.coli bacteria in water collected from environments at different temperatures."