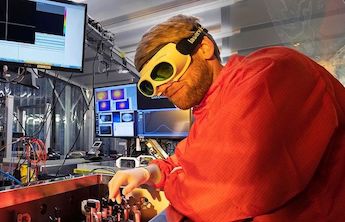 The breakthrough involves the use of femtosecond laser pulses to excite infrared-active vibrations of molecular bonds, producing emissions which coherently add up to a highly specific fingerprint in the wake of the original excitation. The work was published in Nature.

By measuring infrared emission from molecules, rather than the changes in transmission that follow infrared absorption by a sample as in traditional IR spectroscopy, the technique could reduce any undesirable thermal background on the measured signals, improving both detection sensitivity and dynamic range.

It could also tackle the often problematic issue of IR absorption by water molecules, which both limits practical sample thicknesses in biological systems and complicates the use of aqueous reagents in infrared techniques.

"With this laser we can cover a wide range of infrared wavelengths, from 6 to 12 microns, that stimulate vibrations in molecules," said Marinus Huber of the project team. "Unlike mass spectroscopy, this method provides access to all the types of molecules found in biological samples."

The technique relies on the vibrations induced in sample molecules when specific frequencies of femtosecond-pulse laser light are absorbed. These vibrations continue for a few picoseconds after irradiation has ceased, and themselves generate electromagnetic radiation of the same frequency.

A second probe-pulse of near-IR laser light is then used to detect the emission, recording the characteristic spectral signature of the original molecule.

New possibilities in biology and medicine

"Employing electro-optic sampling, we directly measure this global molecular fingerprint down to field strengths 107-times weaker than that of the excitation. This enables trans-illumination of intact living systems with thicknesses of the order of 0.1 millimeters, permitting broadband infrared spectroscopic probing of human cells and plant leaves."

In trials on human blood serum, the project successfully isolated the infrared electric-field fingerprint from its excitation at a detection sensitivity better than micrograms per milliliter of blood serum, and a detectable dynamic range of molecular concentration exceeding 10 5.

Further improvements to the technique, such as increasing the power of the irradiating laser, could help achieve the ultimate target of single-molecule sensitivity in bulk water. Using alternative wavelengths would be another development, since many of the most informative molecular signatures comprise combinations of compounds belonging to various types of molecules found in cells – proteins, sugars, fats and their derivatives.

A single analytical method that is versatile and sensitive enough to detect and measure the levels of all of them would be a valuable clinical technique, according to the project team.

“This ability to accurately measure variations in the molecular composition of body fluids opens up new possibilities in biology and medicine, and in the future the technique could find application in the early detection of disorders,” said Mihaela Zigman of MPQ.