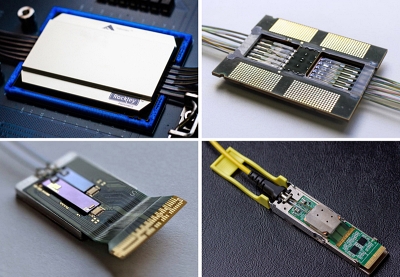 Rockley Photonics, which is developing a silicon photonics technology platform for a variety of potential applications, has attracted another investor - this time in the form of Ahren Innovation Capital, which draws on high-profile scientific expertise at Cambridge University, UK.

While the two parties have not revealed the size of the investment, it follows a $52 million “series E” round of funding closed by Rockley in July 2019. That round, supported by Morningside Technology Ventures, brought the total raised by the firm to $165 million, before Ahren’s involvement.

That came just a few months after Rockley had extended its partnership with key collaborator Hengtong Optic-Electric. In 2017, the Chinese company had agreed a joint-venture with Rockley aiming to produce 400 Gb/s optical transceivers at a site in Suzhou.

Large waveguides
Established by Bookham Technology founder Andrew Rickman in 2013, Rockley’s approach to silicon photonics relies on a large waveguide design that it believes has a number of advantages over rival platforms.

“Rockley Photonics’ technology simplifies the manufacturing, assembly, and test process while maximizing the power efficiency of the optical system,” adds the firm, also pointing out that its lasers - integrated with a flip-chip process - offer fine wavelength control and good power efficiency.

Ahren’s investment in the firm is based on the impact that it believes the silicon photonics platform will enable across a number of so-called “mega-trend” sectors, on top of its evident utility for data center connections.

“The technology has great potential within sensor applications, where low-cost integrated optics solutions are sought for applications in areas such as in machine vision and environmental sensing,” announced the two firms in a joint statement.

AI and healthcare
Ahren also sees potential in 5G infrastructure and artificial intelligence cluster computing environments, where the use of photonics promises to eliminate the constraints of traditional electrical connections.

“Rockley’s platform aligns closely with our interests and spans very well across the application space of our target markets, especially as an enabling technology in new AI and healthcare opportunities,” said Alice Newcombe-Ellis, Ahren’s founding and managing partner.

“By starting with a clean sheet and designing a bespoke fabrication process, Rockley has created a highly versatile platform solution. Importantly, the technology can be manufactured cheaply and at scale for high-volume markets.”

According to Rockley’s most recent financial accounts, filed at the UK’s Companies House, the firm made an operating loss of $38.4 million in 2018 - a year in which it posted just under $20 million in revenues, and spent $45 million on research and development. That had left it with net assets of $22 million, ahead of the series E funding round and the Ahren investment.

Newcombe-Ellis, who studied mathematics at the University of Cambridge before moving into the financial sector, is able to call on some extraordinary expertise in the form of the eight science partners that make up the Ahren team.

Among those eight partners are Cambridge professor Sir Shankar Balasubramanian, the principal inventor of the human genome sequencing technology core to all Illumina sequencing platforms, as well as the Astronomer Royal, Lord Martin Rees, the Royal Society president and chemistry Nobel laureate Sir Venki Ramakrishnan, and Cambridge professor John Daugman, head of the university’s artificial intelligence group and credited with the invention of iris-based biometrics technology.

Quantum venture also backed
Commenting on that level of expertise, Rickman said: “Ahren’s Partners have exceptional credibility and their support for Rockley further validates our technology, strategy and our experienced team.”

Rockley is not the first investment by Ahren in photonics technology. Having closed its own funding of $100 million in September 2018 and $250 million in July 2019, it has since backed “quantum photonics” technology developer Nu Quantum, a spin-off from Cambridge’s world-leading Cavendish Laboratory.

Nu Quantum is building high-performance single-photon sources and detectors that work at room temperature, with a view to initial applications in quantum key distribution (QKD). The company is said to be working with a major UK telecoms firm, and sees applications in both fiber and free-space applications.

Another Ahren investment is 6D.ai, which is working on augmented reality for deployment in smart phones.