At the UK’s Future Photonics Hub’s inaugural industry day, held last week at the University of Southampton and attended by 150 delegates, the keynote speech, entitled “Scaling cloud data centers with packet switching”, was presented by Dr Andrew Rickman, OBE, CEO and Chairman of Rockley Photonics. Dr Rickman was introduced by Hub PI Professor Sir David Payne as “a leader in the commercialization of photonics based research”.

Dr Rickman was previously founder, CEO and Chairman of Bookham, which he grew from a start-up to a leading developer of optical communications components, now known as Oclaro. Rockley Photonics, headquartered in Pasadena, CA, US, develops optical packet switching solutions for “mega” datacenter networks. In his talk, Dr Rickman said that products should start coming to the market in 2017.

Rockley’s mission is the development of massively-scalable optical packet switching solutions, initially designed to target the booming hyper-scale cloud data center market. He said the devices will use “a unique combination of silicon photonics integrated with CMOS and breakthrough RPFabric architecture.”

He added that the company has a well-funded global team of more than 60 people, based in Pasadena CA, but with other members in Oxford, UK, and Helsinki Finland, where the Finnish government has committed to support silicon photonics volume manufacturing. Rockley’s current link with the Southampton and Sheffield-based Photonics Hub is its silicon photonics research and development support.

So what exactly is Rockley developing? Dr Rickman explained: “A state-of-the-art, low-loss 3µm silicon photonics-based platform, essentially a polarization-independent waveguide platform, designed for high-density WDM routing. The devices will be monolithically integrated, high-speed low-power modulators with integrated photo-diodes.” Besides the technical specification designed for high density interconnect applications in data centers, the modulators are expected to have high manufacturing tolerances and excellent yields in fabrication.

Considering the existing data center market solutions, Dr Rickman explained how Rockley Photonics’ planned solutions will fulfill market demands: “Traditional switches are power-hungry, costly and too small.” The data center is widely regarded as a bottleneck in current networking models, with many suppliers working to accelerate and optimize switching performance with the usual optoelectronics development objectives of improving speed and performance while cutting space and energy demands – in particular, reducing the associated thermal problems that damage devices and reduce their lifetimes. 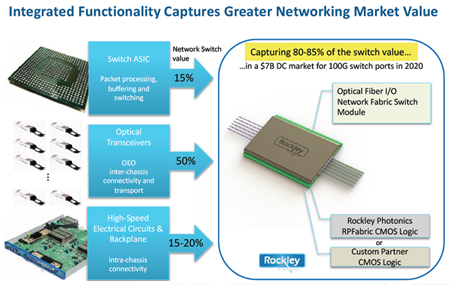 Dr Rickman said that in trying to solve these technical and performance challenges, Rockley recognized that networking costs are not following Moore’s Law, which has for the past 50 years been a reliable guide to the development path of integrated electronics systems. He cited the work of Dorren et al, in the Journal of Lightwave Technology, which noted that the relative cost of networking is actually increasing with respect to compute power.

“Many are left scratching their heads how a potential 1,000x increase in compute capacity in datacenters over the next 10 years will be addressed by networking,“ he said. This is where he believes that Rockley’s approach will be able to disrupt the market.

He said, “Our unique network fabric solution crosses over a trio of current and legacy market areas and players in a dynamic and fragmented market space. Innovating across the boundaries will cause disruption and get us noticed. There is no direct competition to Rockley Photonics at the integrated solution level.”

As part of the company’s development program, Rockley Photonics is collaborating with the Silicon Photonics Group and the Photonics Hub at University of Southampton, where the team supports silicon photonic device modeling, design and the fabrication process of characterization. He said, “The work is focused on next-generation functional elements in silicon photonics to increase the optical data capacity on a silicon photonic chip.”

Dr Rickman concluded by praising the effectiveness of the new Hub, which was launched in January 2016: “There is a world-class team that has longest experience in these fields, there is a short cycle time for device fabrication and the Photonics Hub has a focus on reducing fabrication cycle time; the key to converting the research into appropriate processes for eventual volume manufacturing.”