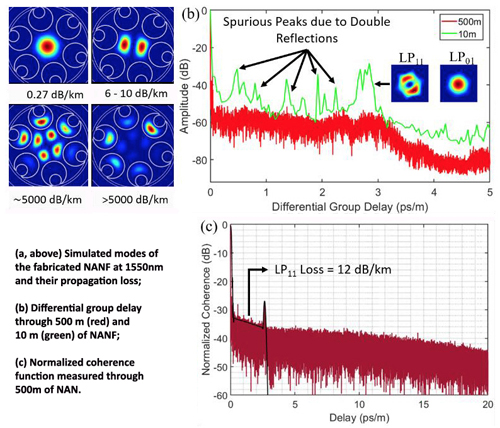 Researchers from the Zepler Institute for Photonics and Nanoelectronics at the University of Southampton, UK, have demonstrated what they call “a new leap in hollow-core fiber performance”, adding that it “underlines this technology’s potential to soon eclipse current optical fibers.”

The novel technology, which is being developed in the Zepler Institute’s Optoelectronics Research Centre (ORC), is believed able to reach lower loss and higher data transmission capacity than all-solid glass fibers, with current research accelerating models toward this peak performance.

The latest hollow-core fibers attenuate the light traveling through it by 50% less than the previous record transmission, reported only six months ago. The maximum transmission length at which data can be relayed in such fibers has also doubled.

Thanks to an innovative design proposed at the ORC, in the space of 18 months the attenuation in data-transmitting hollow-core fibers has been reduced by a factor of >10, from 3.5dB/km to 0.28 dB/km within a factor of two of the attenuation of conventional all-glass fiber technology. At the same time, the maximum transmission distance at which large bandwidth data streams can be transmitted through an air-core has been improved by more than 10 times, from 75 to 750km.

Professor Francesco Poletti, Head of the ORC’s Hollow Core Fibre Group, said, “Transmitting light in an air core rather than a glass core presents many advantages which could revolutionize optical communications as we know them.

“These latest results further reduce the performance gap between hollow core fibre and mainstream optical fibre technology, and the whole team is really excited by the prospect of the additional significant improvements that seem possible, according to modelling.

He added, “Latency, which is the round-trip time for communications, is becoming as important as bandwidth for the new digital economy. Network latency creates a delay between sensing and its response, causing sickness in AR/VR users, loss of fidelity in remote surgery and accidents in autonomous systems.

“These fibers deliver a vital 30% reduction in round-trip data transmission times and could enable the next generation of connected real-time digital applications, from smart manufacturing and advanced healthcare to the entertainment.”

The team are working in close collaboration with one of the leading groups in advanced optical communications at the Politecnico di Torino, led by Professor Pierluigi Poggiolini, and ORC spinout Lumenisity.