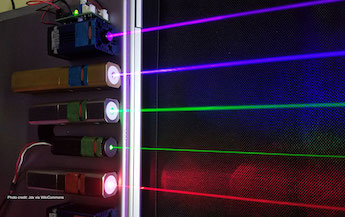 Quantum dots, semiconductor particles small enough in size that single electrons can be confined within the structures, are a promising source of laser light for certain applications, but their practical use has posed some challenges.

Although the laser output can be effectively tuned through careful choice of the semiconductor material employed and the dimensions of the quantum dot, any minuscule defects in the structure tend to split the output into multiple wavelengths, reducing the power and utility of the beam.

A project led by the University of Utah has developed a possible solution in which two such microdisk optical resonators are evanescently coupled, producing spectra in which the mode-splitting is reduced. The work was published in Nature Communications.

"It’s not impossible that someone could make a defect-free laser with quantum dots, but it would be expensive and time-consuming," said Evan Lafalce of the University of Utah and lead author of the study. "In comparison, coupling is a quicker, more flexible, cost-effective way to correct the problem. This is a trick so that we don’t have to make perfect quantum dot lasers."

The Utah project tested its theory using colloidal quantum dot (CQD) microdisk lasers, manufactured from a cadmium selenide material and each around 7.5 nanometers in size. CQDs are known to be a promising photonic component, relatively easy to fabricate using standard lithographic techniques and a variety of substrates, in comparison to the high-vacuum film processing methods required by some other inorganic quantum dot sources.

Each individual CQD laser produced an imperfect output, due to fabrication defects acting as asymmetric scattering centers, with the resulting emission spectra split across a wavelength range as expected. But when the team coupled two CQD lasers together, it was a different story.

The first CQD, pumped by green irradiation, acted as normal and emitted a beam of red light, the full-gain power of which depended on the power of the pump illumination. The second of the evanescently coupled CQDs, positioned around 400 nanometers away, was then pumped and also began to emit.

"The second laser's gain was increased, closing the gain difference between the two lasers until it became similar, when the interaction between the two lasers corrected the splitting and focused the energy into a single wavelength," commented the University of Utah team. "This is the first time anyone has observed this phenomenon."

The reasons behind this purification of the laser spectrum appear to lie deep within the modes of inter-disk and intra-disk coupling, but this quantum effect may have significant real world applications. An ability to fine tune the quality of an emission spectrum could assist the acceptance of CQDs in general, mitigating the normal trade-off between their processing advantages and the quality of their output, with nanoparticle-sensing and optical communications set to benefit.

"In the past 30 years, researchers have been experimenting with using light to carry information, rather than electrons used in traditional electronics," commented the University of Utah.

"For example, rather than putting lots of electrons on a microchip to make a computer run, some envision using light instead. Lasers would be a big part of that and the ability to correct wavelength splitting can provide a significant benefit to controlling information through light. It could also be a major advantage to use materials such as quantum dots in this field."