Aim is to develop and integrate all QKD key components in a single silicon-photonics chip to counter quantum-based threats. 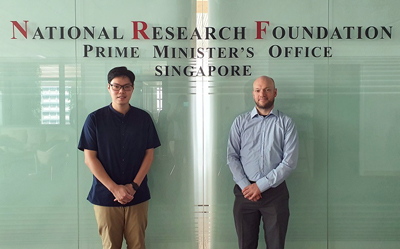 imec, a research and innovation hub in nanoelectronics and digital technologies, and the National University of Singapore (NUS) have signed a research collaboration agreement to develop new types of silicon photonics chip-based prototypes for secure quantum communication networks.

In the frame of this five-year agreement, the partners will jointly develop scalable, robust and efficient technologies for quantum key distribution (QKD) and quantum random number generation (QRNG), which are some of the building blocks of the emerging secure Quantum Internet.

The partners commented, "Research in quantum information science has indicated that large-scale quantum computers, when realized, will render most of today’s encryption techniques insecure."

“Post-quantum cryptography is essentially about updating existing cryptographic algorithms and standards so that current infrastructures would be ready for a post-quantum digital world. It however maintains a security profile that is still based on unproven assumptions.

“Quantum cryptography, on the other hand, offers a much stronger security guarantee: its security is solely based on the laws of quantum physics and thus is in principle unbreakable.”

Considering critical information infrastructures with long-term security needs such as healthcare, government and banking, the partners believe that quantum cryptography is the safer way to go.

With this approach, two essential building blocks are QKD and QRNG. At present, however, the methods and processes enabling these quantum technologies are limiting and expensive. Consequently, these bottlenecks have made quantum cryptography unattractive for wide-spread deployment. The research collaboration is supported by the National Research Foundation of Singapore under the Quantum Engineering Programme.

Joris Van Campenhout, R&D Program director at imec, explained, “Our approach consists of developing and integrating all QKD key components in a single silicon-photonics based chip, which ensures a cost-effective solution.

“As a first deliverable, we will jointly develop an ultrafast quantum random number generation (QRNG) chip, a key component for generating the secret keys. Secondly, we will work on a compact, fully integrated photonic quantum transmitter prototype chip. In these efforts, we will strongly leverage imec’s deep expertise in silicon photonics technology, originally developed for conventional datacom and telecom applications.”

Dr. Charles Lim, Assistant Professor at NUS, commented, “The development of chip-based prototypes will allow us to turn today’s QKD technologies into an efficient communication networking solution. Our team at NUS will bring in expertise on the theory, protocol design, and proof-of-concept experiments of the quantum random number generator and QKD systems.

“We’re very excited to collaborate with imec, as their expertise will allow us to translate these solutions into real silicon-photonics based chips – by using imec’s process design kits and re-usable IP blocks.”