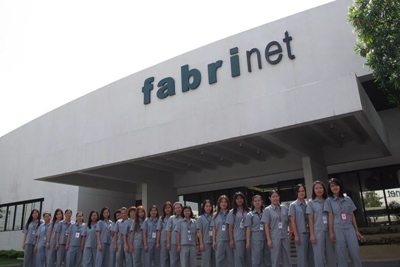 Thailand-headquartered Fabrinet, which packages a wide variety of products for clients in the photonics sector, has seen its stock price slump by nearly one-fifth - despite posting its best-ever financial year.

At $1.58 billion, the New York-listed firm’s sales for the year ending June 28 were up 15 per cent year-on-year, thanks in part to a solid closing quarter as revenues rose 17 per cent to $405 million.

That performance was reflected on the company’s bottom line, with Fabrinet posting net income of $30.7 million in the latest quarter, up from $21.6 million a year ago.

Near-term disruption
However, a combination of the disruption caused by the US government’s export ban on China’s Huawei, the US-China tensions more generally, and a slowdown in the industrial laser sector prompted CEO Seamus Grady and his team to predict a 4 per cent sequential decline in sales as the company’s new fiscal year gets under way.

“Our customers are working through the restart of certain shipments to Huawei,” he told an investor conference call. “With this, we expect the timing of changes in supply chains to temporarily impact some of our optical communications business in the first quarter.”

Combined with the lower demand for industrial laser applications, the likely result is that quarterly sales will slip to around $390 million in the September quarter.

Although the Fabrinet executive team is confident that the impact of the Huawei-related supply chain “reset” will be temporary, and remains optimistic about its longer-term prospects, financial markets sent the firm’s stock price tumbling 18 per cent following the update.

Around three-quarters of Fabrinet’s sales relate to applications in various forms of optical communications. The company has particularly strong links with Lumentum, and with that business incorporating Oclaro since December 2018, the combined entity accounted for almost a quarter of Fabrinet’s turnover in the latest fiscal year. Former Oclaro CEO Greg Dougherty now sits on the Fabrinet board of directors.

Silicon photonics and Infinera
Grady pointed out that an increasing proportion of Fabrinet’s sales were now being realized from silicon photonics applications – technology that drove sales of close to $90 million during the latest quarter.

The reliance on Lumentum could also be reduced in the near future, thanks to an agreement with photonic integrated chip (PIC) and networking system builder Infinera. Fabrinet is in the process of taking over manufacturing responsibilities for Infinera’s Coriant division, based in Berlin, Germany, and acquired last year at a cost of $430 million.

“We've made significant progress in transferring the production of these products from Berlin to our facilities in Thailand and this process is now essentially complete,” said Grady, also telling investors that the new business could account for more than 10 per cent of Fabrinet sales by 2020.

Responding to questions from equity analysts during the investor call to discuss the latest results, Grady said that demand from the industrial laser sector – worth $53 million to Fabrinet in the June quarter – would remain depressed for the foreseeable future.

“We believe that the worldwide market, especially for welding and cutting, is down by about 10 per cent quarter-on-quarter, and we think that's going to continue for a couple of quarters,” said the CEO.

Location advantage
While the twin impacts of the Huawei export ban and US tariffs on global supply chains has been a negative one thus far, Fabrinet should actually be in a position to benefit from the protectionist actions, thanks to its location in Thailand.

“A number of our customers are talking to us about switching their supply chain out of China and moving it to Thailand,” Grady said. “Those conversations are still going on, [but] that's maybe slower to move than we would like.”

However, as customers take time to adjust their shipment plans and supply chains accordingly, Fabrinet is having to wait a while to feel the benefit.

• After closing at $46.46 on August 20, the day after Fabrinet announced its latest financial results, the company commanded a market capitalization of just over $1.7 billion.