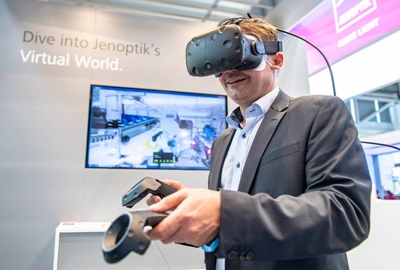 Photonics giant Jenoptik is set to increase laser diode production at its Berlin fabrication facility once again, with a significant investment in new wafer processing equipment.

The Jena-headquartered firm has announced plans to commission new deposition, lift-off, and facet coating tools – with a particular focus on improving the performance of high-power laser diode bars.

“Investments are currently being made primarily in the front-end process of wafer processing and in facet coating,” stated the company. “Jenoptik will commission new metallization plants for wafer processing by the beginning of 2020 at the latest.”

The production line modernization is expected to deliver enhanced reliability of high-power devices, and site manager Jürgen Sebastian said: “With the new investments, we want to expand the total production capacity, increase the value added in the process chain, and accelerate the worldwide order processing of lasers.”

Lidar emerging
While key markets for the devices right now include aesthetic medical applications and advanced manufacturing, Jenoptik sees an emerging need for laser diodes in lidar sensors used by the automotive industry.

The company has been making laser diodes at the Adlershof Technology Park site for nearly two decades, ever since the Jenoptik Diode Lab subsidiary was founded as a spin-off from the nearby Ferdinand Braun Institute.

In recent years, the production facility has benefited from a series of investments. Following an extensive expansion of the process line in 2012, Jenoptik invested in a new lithography stepper last year.

Earlier this year, the site’s activity and business was transferred to Jenoptik’s Optical Systems subsidiary, as part of a wider corporate restructure.

Vincorion sell-off
Meanwhile, the company has confirmed plans to sharpen its focus on photonics technologies, with the decision to sell its recently rebranded “Vincorion” mechatronics business unit.

“The proceeds from the potential sale of Vincorion will be used to expand the company’s international reach and vertical integration, particularly in the strategic growth regions of the Americas and Asia,” announced Jenoptik.

“We want to optimize the product portfolio and gain access to new customers and markets through bolt-on and transformatory acquisitions,” says Jenoptik’s CEO Stefan Traeger.

Focused on applications in the military, aviation, and rail industries, Vincorion employs 790 people and generated revenues worth €166 million last year - approximately one-fifth of the Jenoptik Group’s total turnover. In the opening quarter of this year the division posted a loss as its sales plunged 30 per cent, although orders were expected to bounce back strongly.

Jenoptik has also decided to extend the appointment of Traeger, who took over from Michael Mertin as company CEO back in 2017, for another five years.

Matthias Wierlacher, who is chairman of Jenoptik’s supervisory board, commented: “Over the last few years, under the management of Dr. Stefan Traeger, Jenoptik succeeded in combining the Group’s transformation into a technology group focused on photonics with profitable growth and successful acquisitions.”