Sharp increase in sales and bookings from ‘Light and Production’ division keeps German firm on track despite weakness elsewhere. 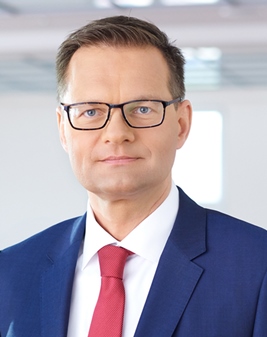 The Germany-based optics and photonics company Jenoptik has posted a decrease in sales and profits for the opening quarter of the year, but remains confident of hitting its annual targets after a sharp uptick in orders related to automation technologies.

Those figures appeared to prompt a 5 per cent fall in Jenoptik’s stock price on the Frankfurt exchange, but the Jena-headquartered firm maintained an upbeat tone, pointing to strong performance in its “Light and Production” division and an order book now at record levels.

CEO Stefan Traeger highlighted the mixed picture in a company release, saying: “On the one hand, export restrictions in the defense business are inhibiting growth…we are, however, seeing continuing good demand in our important semiconductor equipment and automotive markets and, overall, remain on course for growth, as our order book shows.”

Automation boost
While other companies in the photonics sector have reported sharp slowdowns in sales of equipment used to manufacture microelectronics devices and semiconductor chips, Jenoptik has had a more positive experience thus far.

Its “Light and Optics” business unit, posting a slight increase in quarterly revenues to €83.2 million, was boosted partly by what Jenoptik described as “continuing good business within the semiconductor equipment industry”. However, order intake was down compared with last year, when the company experienced a boom in high-volume bookings.

Sales growth was much stronger within the “Light and Production” division, with quarterly revenues up nearly 30 per cent on the prior year’s figure. That increase was largely attributable to recent acquisitions including Canada's Prodomax, with profitability and bookings also up sharply and strong traction in the North American automotive market.

“Demand for automation solutions saw particularly strong growth, as shown by the orders worth over €30 million received from North American OEMs and automotive suppliers in the first few months of the year,” reported Jenoptik. “Deliveries will include several assembly lines and cutting-edge systems for material processing and handling.”

Jenoptik also has high hopes for its new "SYIONS" digital imaging platform. In March it signed a long-term development agreement with a "leading international life science company" that is expected to realize some €30 million in revenues over the next few years.

Saudi arms embargo
While the photonics-related part of the Jenoptik business appears robust, the current drag on sales comes largely from the company’s “Vincorion” division, which is the relatively new brand name for the company’s mechatronics product lines sold into defense and civil infrastructure applications.

That was hit by the German government’s decision to extend arms export restrictions, including the embargo on sales to Saudi Arabia in late 2018, a response to the killing of dissident journalist Jamal Khashoggi inside the Saudi Consulate in Istanbul.

Vincorion posted a quarterly loss as its sales fell nearly 30 per cent year-on-year, although strong orders for other defense-related projects have since boosted the division’s book-to-bill ratio significantly.

CEO Traeger, who is still predicting full-year revenue growth in the region of 5 per cent on the already record-breaking 2018, summed up: “On the back of sustained good demand in key markets, recently acquired projects, and good order intake growth, we are confident to see good business performance, particularly in the second half of the year, and to achieve our financial targets for 2019.”