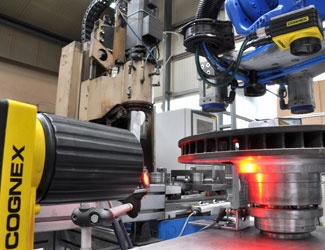 Weak demand across its two most significant markets will continue to hit the sales of machine vision market leader Cognex in the third quarter of the year.

Announcing the Natick, Massachusetts, firm’s financial results for the three months ending June 30, company founder and chairman Bob Shillman told investors that it was “frustrating” to report year-on-year declines in both sales and profits.

Attributing the decline to the twin downturns impacting the automotive and consumer electronics sectors - and smart phone manufacturing in particular - Shillman and Cognex’ CEO Rob Willett said that the impact had been mostly felt in Europe and China.

“[The] factory automation market in Europe was considerably softer than we anticipated in Q2, and the impact of this will be more noticeable in our Q3 results,” Willett said. “Demand for many end markets is declining, notably in automotive, which is one of our largest markets in Europe.”

He continued: “Customers, particularly those that are exposed to the slowdown in Greater China, are reducing and deferring large projects. Asia has also weakened. This is due to a continuation of the challenges that we have been experiencing broadly across China, and to softness observed in the industrial markets elsewhere in Asia.”

$50M consumer electronics hit
At $199 million, sales in the second quarter of 2019 were down 6 per cent from the same period in 2018, although Cognex remains highly profitable - it posted a net income of $48.7 million for the latest period, down from $56.2 million a year ago.

But those numbers are likely to slide further in the September quarter. Willett told investors that Q3 sales should come in at around $180 million, compared with $232 million last year, and the record-breaking figure of $260 million posted in Q3 of 2017.

“The decline is due almost entirely to substantially lower revenue from consumer electronics,” Willett explained, adding that the projected figures anticipate a $50 million year-on-year decline that is largely attributable to the smart phone slump.

The market dynamics have prompted Cognex to re-allocate resources to other areas, notably logistics and e-commerce, where Willett believes that annual growth will remain very strong.

“If there is a silver lining to this very disappointing market situation we're seeing in automotive and electronics, it's that we're able to re-allocate those Cognoids [i.e. Cognex employees] to some very exciting growth opportunities, notably logistics and deep learning,” said the CEO.

The machine vision company does appear to have been affected by the ongoing trade dispute between the US and China, including the blacklisting of Huawei - now ranked by analysts at IDC as second only to Samsung in terms of global smart phone market share.

“Cognex does supply all of the major manufacturers of smart phones, whether directly or indirectly, through contract manufacturers,” said Willett, adding that the current market and trade conditions make it more difficult to work with some manufacturers than others.

“That's a challenge for us, certainly,” added the CEO. “Our guidance contemplates that situation, and I think we will [just] have to see how it's going to play out from a government and trade talk point of view.”

Automotive in transition
While the consumer electronics sector has the potential for a rapid rebound at some point, any such turnaround in automotive is likely to take much longer.

As evidenced by several of the world’s largest car makers re-trenching, Willett said that the automotive industry remained in a state of over-supply with conventional combustion-powered vehicles - while the switch to electric vehicles was not yet at the point requiring a major investment in automation technologies like machine vision.

“I'm very optimistic about the long term, but much less optimistic about this year,” said Willett of the automotive market, adding that there was “very significant” momentum and investment around electric and hybrid electric vehicles, as well as new autonomous driving features, that should see lots of new designs come to market in around 3-5 years’ time.

“At some point, I think there's going to be a race to get those products to market and to gear up in automation,” said the CEO. “But I think we have to see more of those products, [as] those new cars come into production - and I think we'll probably have a better view of that as we exit the year.”

• Cognex' stock price dropped in value by around 6 per cent in pre-market trading July 30. At just under $40 on the Nasdaq, the company commands a market capitalization of close to $7 billion.