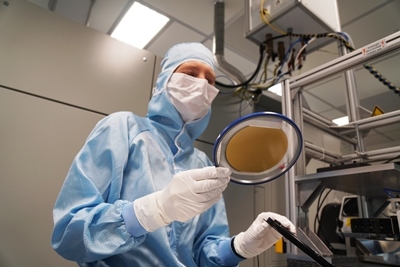 IQE, the UK-headquartered epitaxial wafer foundry, has seen its stock-market valuation plunge after warning that geopolitical tensions will hit sales and profits this year.

Referencing the impact of Huawei’s blacklisting by US authorities specifically, the London-listed firm said that an increasingly cautious marketplace would drag down sales to somewhere between £140 million and £150 million in its current financial year. That compares with a previous consensus expectation of £175 million.

“This is a larger impact than the previously guided risk related specifically to Huawei, due to the far-reaching impacts on other companies and supply chains that are now becoming evident,” announced the firm in a trading update.

Initially, the Huawei row was expected to impact RF applications and IQE's wireless business unit predominantly. However, the company now says that it has received a reduction in forecasts from a number of its chip customers involved in both wireless and photonics markets.

CEO Drew Nelson added: “These are unprecedented times for the global semiconductor industry as geopolitical conditions affect interconnected global supply chains. It is now clear that the impact of Huawei’s addition to the US Bureau of Industry and Security’s Entity List is having far-reaching and long-lasting impacts on global supply chains.”

On a constant currency basis, Nelson and his executive team are now anticipating that IQE’s photonics business segment will grow by less than 30 per cent on 2018 figures. While obviously still a rapid rate of growth, that figure had been expected to exceed 50 per cent previously.

“Strong progress continues to be made at our Newport Mega Foundry for VCSEL production,” stated the firm. “Four reactors are currently in mass production with the first major customer. Two further customers are expected to enter mass production in [the second half of the year]. Sampling continues with an additional 13 customers as part of ongoing qualifications which provide breadth of exposure to global supply chains.”

On the other hand, the outlook for indium phosphide lasers used primarily in optical communications looks dim in the short term, although IQE expects the positive impacts of 5G wireless and hyperscale data center build-outs to provide a major boost beyond this year.

“IQE remains cautiously optimistic about growth opportunities for 2020, and as global supply chains adjust we expect that the significant market drivers such as 5G, connected devices and lidar will regain momentum,” said the firm.

Nevertheless, the current market uncertainty has prompted the company to take “prudent expenditure actions” in the meantime.

• Following the update, IQE’s stock was trading at a price of around 44p – down nearly 40 per cent from its previous closing price of 71.65p.