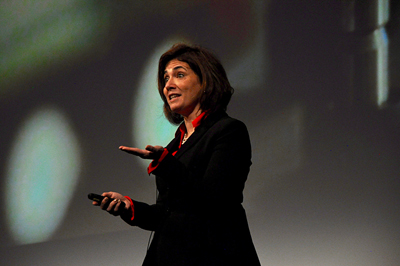 Monday’s first plenary talk of this year’s World of Photonics Congress in Munich was presented by Prof. Michal Lipson, Eugene Higgins Professor of Electrical Engineering and professor of Applied Physics at Columbia University, New York. She is one of the main pioneers in the field of silicon photonics, having specialized in this field for more than 20 years.

Among many of her discoveries, she has demonstrated the first silicon photonics gigahertz modulator for transmitting electronic signals over large distances with low power. In the main conference hall of the ICM, Prof. Lipson described how today silicon photonics is being commercialized extensively – way beyond the data center application it was believed to be best suited to, in its early days.

In fact, she said, silicon photonics has amazed many conventional electronics and photonics scientists who had initially “rolled their eyes” when they thought it would not amount to much in the early 2000s.

She told the ICM audience, “In 2000 the microelectronics industry was desperate. It was clear that copper wires for computing were consuming way too much power. We often think that the computers were limiting Moore’s Law but it was actually the interconnection between processors and memories. The answer was clear to replace the electronic connectors with optical connecters because light does not dissipate power.

“So the microelectronics sector was pretty excited about the prospect of introducing photonics on a microelectronics platform. But they had one condition which that everything had to be completely compatible with the billion dollar infrastructure that was already invested in microelectronics.

”We, the photonics people, had to make sure that we developed a platform that was not based on the semiconductors that we already knew – we had to work with the material of microelectronics: silicon.

“Then silicon photonics pioneers showed how we could modulate light using a small effect known as plasma dispersion, which we all use today. To make that work, we use a resonator to amplify the effect.”

Improved understanding and capabilities led to what Lipson called an “explosion in silicon photonics. This has all happened in less than a decade. It is now the fastest moving field in physics. This has also been significantly helped by the fact that CMOS processes for electronics were already well established.”

Prof. Lipson continued, “Nowadays, if you look at the predictions of where silicon photonics is going, it’s growing exponentially, which is not a surprise, but its application areas are now way beyond data centers. These new market and application areas are avionics, metrology, sensing, medical devices spectroscopy, and lidar and neurophotonics, in particular.”

“In the early days I used to see a lot of rolling eyes saying silicon photonics will never be as big as it has become. But now lidar is probably the hottest technology out there in Silicon Valley. It enables 3D imaging, especially in the area of self-driving cars.”

But there is still a lot of significant development required to capitalize on the potential of silicon photonics, says Prof. Lipson. “If you want to start working in this field, I would say to the young generation that silicon photonics is in dire need of phase modulators.”

Moving on to neuroscience, which she described as “an application of silicon photonics that we wouldn’t have dreamt about in the past,” Prof. Lipson said, “Optogenetics helped us to understand which neurons are involved with which activities. This could also be integrated with tiny silicon probes in the brain; silicon photonics forms the waveguides for observing and inducing the neural activity.”

“How do neuroscientists identify that a stimulation has happened? It’s actually very easy to integrate electrodes in silicon as detectors in the same silicon photonics-based neural activation probe. This enables in vivo results, which we [at Columbia] have recently published.”

She concluded, “So silicon photonics is enabling incredible applications, such as optomechanics, technological photonics, nonlinear optics, metrology, spectroscopy, lidar, all of these now based on chip scale silicon photonics.”

At Columbia, Lipson’s research focuses on areas where nanophotonics has a big impact, both fundamentally and technologically. Her main areas of research include novel photonic materials and fabrication, silicon photonics and non-reciprocity, nano-magnetism and thermal control, nanophotonics for neuroscience, optomechanics, nonlinear and quantum optics, and sensing and optofluidics.