Karsten Danzmann entertains this year’s LASER Congress with a journey through the sounds of the universe. 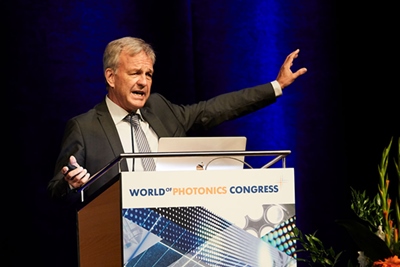 by Mike Hatcher in Munich
“I will hear the Big Bang in gravitational waves - and you will, too.”

That was the promise with which Karsten Danzmann concluded his “global plenary” presentation at the 2019 instalment of LASER World of Photonics, after an entertaining and at times comical tour of the cosmos.

As director of the Max Planck Institute for Gravitational Physics (also known as the Albert Einstein Institute) in Hannover, Danzmann is one of the key players in the successful development of gravitational wave observatories – and, in particular, the optics and photonics technologies that have made gravity wave detection possible.

“Astronomy is not what it used to be,” he told a packed house at the giant Messe Munich event. “Photonics has changed it.”

Beating the noise
Tracing that change back to the 1880s, and the Michelson-Morley experiment that demonstrated just how precisely even the very first interferometer could measure length - even before lasers were invented - Danzmann recalled the day that the very first gravity wave "chirp" arrived, and the subsequent flurry of checks, excitement, and accolades as Einstein's relativistic prediction of rippling space-time was proved correct.

Since then, upgrades to the interferometer lasers and optics have improved sensitivity to such an extent that the black-hole collisions that previously made for Nobel prizes and front-page news - even in Germany’s uber-tabloid Bild - have become rather run-of-the-mill.

At the “GEO600” interferometer in Hannover, which effectively acts as a test-bed for new technologies to further improve sensitivity, researchers are now looking at ways to beat phenomena like quantum and even thermal noise, further opening the observation window on gravity waves caused by different cosmic phenomena.

That involves using tricks such as “squeezed” laser light, noise-cancellation techniques analogous to those found in audio headphones, and monolitihic mirrors with nanostructured surfaces instead of conventional sputtered coatings.

“There’s no fundamental limit in sight,” said Danzmann of the push to better sensitivity, speculating that each of the approaches under consideration could be built within a few years.

In fact, the real limitation for interferometers is simply the length of the tunnels housing them that can be built before sheer construction cost and the curvature of the Earth come into play. And to get around that, the plan is to launch a space interferometer with three arms, each measuring 2.5 million kilometers.

Launching LISA
Known as “LISA”, the space interferometer is already well under development and with backing from the European Space Agency and NASA resuming its involvement, the plan at present sees LISA being launched in the 2028-2034 time frame.

That might still seem like a long way off. But by then a series of giant new optical telescopes will be up and running, while the terrestrial interferometers will have reached new levels of sensitivity. What LISA will do is enable astronomers to “hear” the lower-frequency space-time ripples produced by collisions between much more massive black holes that simply cannot be detected by the terrestrial interferometers.

And when those colossal collisions are detected, the new suite of optical telescopes will be pointed in their direction, bringing about another step-change in astronomical capability. 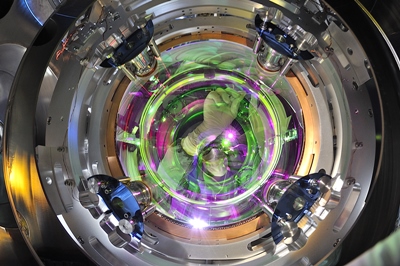 There will be utilitarian spin-off benefits, too. Satellite interferometry has already been shown capable of "seeing" groundwater on Earth, calculating ice mass loss in Greenland, and measuring the height of Himalayan mountains with a precision of less than a nanometer.

As water becomes an increasingly scarce and valuable commodity, that kind of capability is expected to be hugely significant in the geopolitical climate of the future.

Signing off with a series of gravity-wave sounds more akin to a Kraftwerk gig than a plenary talk, Danzmann played the kind of noises that we might hear when collisions between giant black holes, and even galaxies, are detected, adding the eerie sonic drone generated by what he called a “cosmic cemetery” of 3000 white-dwarf stars.

But that orchestral vibration will be just the start. “I will hear the Big Bang in gravitational waves,” he concluded. “And you will, too.”