Scheduled for launch in 2028, CASE will be sensitive to NIR, to complement ARIEL's other IR spectrometer. 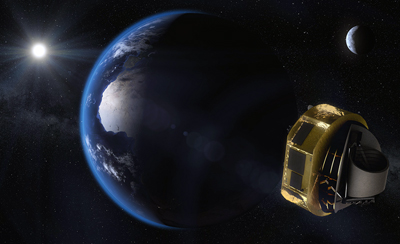 NASA is to contribute a significant optical instrument to a European space mission intended to explore the atmospheres of exoplanets, for the first time.

The instrument, called the Contribution to ARIEL Spectroscopy of Exoplanets, or CASE, will add scientific capabilities to the European Space Agency's Atmospheric Remote-sensing Infrared Exoplanet Large-survey (ARIEL) mission. The ARIEL spacecraft with CASE on board is expected to launch in 2028. CASE will be managed by NASA's Jet Propulsion Laboratory in Pasadena, California, with JPL astrophysicist Mark Swain as the principal investigator.

Thomas Zurbuchen, associate administrator for NASA's Science Mission Directorate in Washington, commented, "The more information we have about exoplanets, the closer we get to understanding the origins of our solar system, and advancing our search for Earth-like planets elsewhere."

ARIEL was selected as the fourth medium-class mission in ESA's Cosmic Vision program. It will study what exoplanets are made of, how they formed and how they evolve, by surveying a diverse sample of about 1000 extrasolar planets, simultaneously in visible and infrared wavelengths. It is the first mission dedicated to measuring the chemical composition and thermal structures of hundreds of transiting exoplanets, enabling planetary science far beyond the boundaries of the Solar System.

ARIEL, carrying CASE, will take planet-hunting through transits one step further, by delving deeper into planets already known to exist. So far, scientists have found more than 4,000 confirmed exoplanets in the Milky Way. NASA's retired Kepler space telescope and active Transiting Exoplanet Survey Satellite (TESS) are two observatories that have contributed to this count. These telescopes have discovered planets by observing brightness of a star's light dimming as a planet crosses its face, an event called a transit.

So far, telescopes have only been able to carefully probe the atmospheres of a handful of exoplanets to determine their chemistries. ARIEL's much larger, more diverse sample will enable scientists to look at these worlds not just as individual exotic objects, but as a population, and discover new trends in their commonalities and differences.

The CASE instrument will be sensitive to light at near-infrared wavelengths, which is invisible to human eyes, as well as visible light. This complements ARIEL's other instrument, an infrared spectrometer, which operates at longer wavelengths. CASE will specifically look at exoplanets' clouds and hazes. It will also allow measurements of each planet's albedo, the amount of light the planet reflects.

The spacecraft will focus on exceptionally hot planets in our galaxy, with temperatures greater than 320°C (600°F). Such planets are more likely to transit their star than planets orbiting farther out, and their short orbital periods provide more opportunities to observe transits in a given period of time.

The CASE instrument consists of two detectors and electronics that contribute to ARIEL's guidance system. CASE takes advantage of the same detectors and electronics that NASA is contributing to ESA's Euclid mission, which will probe deep questions about the structure of the universe and its two biggest mystery components: dark matter and dark energy.

The ARIEL spacecraft with CASE on board will occupy the same orbit as NASA's James Webb Space Telescope, expected to launch in 2021. Both will travel some 1.5 million kilometers from Earth to a special point of gravitational stability called Lagrange Point 2. This location allows the spacecraft to circle the Sun along with the Earth, while using little fuel to maintain its orbit.

"This is an exciting time for exoplanet science as we look toward the next generation of space telescopes and instruments," said Paul Hertz, director of the astrophysics division at NASA Headquarters, Washington. "CASE adds to an exceptional set of technologies that will help us better understand our place in the galaxy."