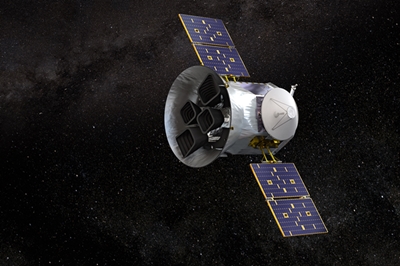 At approximately nine-tenths the diameter of Earth, exoplanet “HD 21749c” is believed to have a rocky make-up. However, because it is orbiting very close to its host star, with an orbit lasting just eight days, it is thought to experience temperatures as high as 427°C. That puts it outside the so-called “Goldilocks zone” required to harbor liquid water and therefore life.

Around 53 light years away in the constellation Reticulum, the newly discovered exoplanet is the tenth that TESS has identified so far, and the second to be found orbiting the same star.

Multi-camera suite
TESS uses a suite of four identical imaging cameras to survey a broad swath of the night sky, searching for regular dips in the brightness of stars that could indicate the presence of orbiting planets.

Designed and built by the Massachusetts Institute of Technology’s (MIT) Lincoln Laboratory in Lexington, Massachusetts, and the MIT Kavli Institute, the cameras on board feature 16.8 megapixel CCD sensors. Each of the four cameras features seven lenses to provide a wide (24x24°) field of view, while other features include a red-optical bandpass covering the 600-1000 nm wavelength range.

TESS is scheduled to survey 26 sectors of the sky over two years of operations, equivalent to around 85 per cent of the entire sky in all. So far it has been concentrating on the southern sky, and is set to switch its attention to the northern sky shortly.

Once it has completed its sweep of the northern sky, around 5000 transit-like signals ought to have been captured for follow-up with direct imaging. Out of those, approximately 50 transiting exoplanets of a similar size to Earth are expected to be identified for future investigation.

Using the more advanced imaging and spectroscopic equipment offered by probes like the James Webb Space Telescope (JWST) and instrumentation in large terrestrial observatories currently under construction, astronomers and astrophysicists will be able to search for signs of life, for example oxygen gas and water vapor in exoplanet atmospheres.

Measuring exoplanet mass
Publishing results of this first Earth-sized discovery in Astrophysical Journal Letters, lead author Diana Dragomir from the MIT Kavli Institute and colleagues also reported their observation of a Neptune-like exoplanet in the same star system that has an orbit lasting 36 days.

Dragomir told MIT News that the result represented a milestone for TESS, and set the path for finding smaller planets around even smaller stars that might prove more habitable.

Just as in our own Solar System, smaller planets are generally thought to exist in “families”, suggesting that more rocky worlds could be orbiting the same star.

While this represents TESS’ first identification of an Earth-sized exoplanet, NASA’s Kepler Space Telescope has previously discovered scores of similar worlds. However, many of Kepler’s discoveries are relatively distant and would be impossible to interrogate further using current instrumentation.

In contrast, TESS is looking for planets orbiting much closer and brighter stars, meaning that scientists should be able to measure Earth-like exoplanet masses for the first time.