Camera distinguishes valuable plants then a laser zaps the weeds; on show at Hannover farming expo, until November 16th. 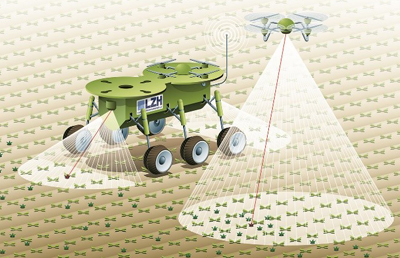 Under the marketing slogan “Lasers instead of pesticides”, the LZH-developed Farming 4.0 technology is making its industry debut during the Agrtechnica, between November 10th to 16th, at the Pavilion of the state of Niedersachsen (Hall 21, stand A05).

The new anti-weeds approach developed by the LZH is based on the non-contact, optical interaction of light with biological material: first of all, a system of cameras is used to distinguish weeds from crops. This is the basis for subsequently using laser radiation to precisely destroy any weeds and thus help crops to gain a decisive growth advantage.

LZH comments that by this means the use of herbicides can be “drastically reduced”. Since laser radiation acts purely physically, no plant resistances are allowed to form, the quality of the soil can be maintained and beneficial minerals and the like in the soil are protected. In addition, the laser-based approach can easily be integrated with the developing trend of “Digital Farming”. 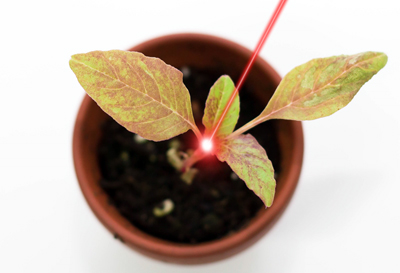 Clean cut: no plant resistance will develop, nor soil chemistry be damaged.

LZH adds that the new system’s primary application areas are in defense of crops with a high added value in organic farming, such as carrots, sugar beet and onions. “The operation of such a laser-based system is possible on different platforms: autonomous, self-driving, front-mounted or rear-mounted,” says the launch announcement.

The focus of the LZH lies on the fields of optical components and systems, optical production technologies, and biomedical photonics.

Interdisciplinary cooperation between natural scientists and mechanical engineers makes innovative approaches to challenges from the development of components for specific laser systems to process developments, such as in medical technology or lightweight construction in the automotive sector.

Eighteen spin off companies have emerged from the LZH up to now. Thus, the LZH has created a strong transfer between fundamental sciences, application oriented research, and industry. As an independent, non-profit research institute, LZH focuses on innovative research, development and consulting. Its work is supported by the Niedersachsen Ministry of Economic Affairs, Employment, Transport and Digitalisation and is dedicated to the promotion of applied research in the field of photonics and laser technologies. Founded in 1986, LZH now has more than 170 employees.