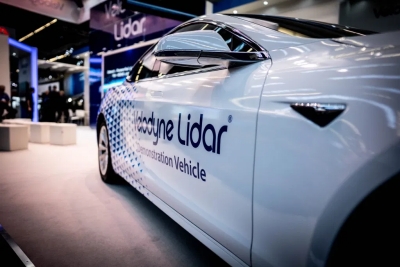 Hyundai Mobis, one of the world's largest suppliers of car parts, is investing $50 million in San Jose-based Velodyne Lidar, with the two firms aiming to mass-produce a new automotive lidar system by 2021.

Closely affiliated with the Korean auto giants Hyundai and Kia, Hyundai Mobis says it plans to integrate Velodyne's laser-based sensors with its own "cognitive" software.

"Hyundai Mobis and Velodyne will commercialize their first lidar system for level 3 autonomous driving in 2021 by this partnership," announced the two companies, adding that they will initially supply the system to the Asian market before expanding the offering to automakers in North America and Europe.

Taking control
Defined by the Society of Automotive Engineers as "conditional automation", Level 3 autonomy is still reliant on a human driver, but one who does not need to monitor the vehicle's environment.

However, the driver of a Level 3 vehicle must be ready to take control of the vehicle at any time, which is why this particular level of autonomy is regarded by some as problematic.

According to this recent Automotive News article, early experiments by Google showed that test drivers immediately put too much trust in the "autopilot" of such vehicles, in some cases falling asleep at the wheel.

It has meant that Google, as well as the likes of Ford and Volvo, have decided not to pursue Level 3 automation at all, skipping it in favor of more highly automated "Level 4" systems that merely give the driver the option of controlling the vehicle.

Nevertheless, companies including Audi, Honda, and Mercedes-Benz have Level 3 developments in the pipeline, with deployments expected in 2020.

Deep learning camera
Hyundai Mobis says that the Velodyne collaboration will "finalize" its sensor technology portfolio for Level 3 automation and above, as the emphasis shifts more towards autopilot.

The Korean company adds that, aside from the lidar plans, it has already developed a short-range radar. By next year it plans to have secured "deep learning" camera technology and high-performance radar.

Its head of strategic planning Ko Youngsuk said in a company statement: "Hyundai Mobis is delighted to cooperate with Velodyne Lidar, one of the industry’s most reliable and mass-production ready lidar sensor providers, to finalize [a] lidar system which is essential in high-level autonomous driving.

“Hyundai Mobis will continue to expand [its] strategic collaboration with various innovators to accelerate open innovation for key technologies.”

One of the early pace-setters in the development of lidar for driver assistance features and autonomous cars, Velodyne attracted $150 million in investment from the likes of Ford and "Chinese Google" Baidu back in 2016.

It has since found itself up against a raft of new competitors, with venture capitalists and auto firms seeking to align themselves with winning lidar solutions for the widely anticipated future era of driverless cars.

Velodyne has also gained financial support from the Japanese camera firm Nikon, which invested $25 million in late 2018. By the end of this year the two companies are due to begin mass production of lidar sensors combining Velodyne's expertise with the long-standing precision optics know-how of the camera giant.