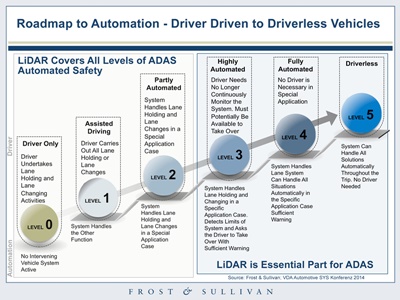 The Ford Motor Company and search engine firm Baidu are investing a combined $150 million in the lidar sensor company Velodyne Lidar, in a bid to accelerate the development and commercialization of self-driving cars.

The latest in a raft of similar announcements involving lidar sensor companies Innoviz Technologies, Denso, TriLumina, LeddarTech and Ibeo Systems, the Velodyne agreement is by far the largest.

Puck sensors
The Silicon Valley start-up, which has previously worked with Ford and Volvo among others, has already developed compact solid-state lidar sensors built around 903 nm laser emitters and avalanche photodiode detectors, with optics designed to support vertical fields of view ranging from 20° to 40°.

Those sensors, called “Puck” in reference to their similar size and appearance to the pucks used in ice hockey, are capable of producing 2.2 million data points per second, have a range of up to 200 meters, but are also small enough to be used on board small drones.

The investment news came as Ford CEO Mark Fields predicted that the Dearborn, Michigan car giant would be mass producing fully autonomous vehicles within five years. “No steering wheel. No gas pedals. No brake pedals. A driver will not be required,” he said.

More specifically, Ford said it intended to have a high-volume, fully autonomous (so-called SAE Level 4; see roadmap graphic above) vehicle in commercial operation in 2021, in either a ride-hailing or ride-sharing service.

Lidar sensors now look to be a critical part of the commercial ecosystem that will make that possible, with the Velodyne announcement coming on top of a flurry of similar developments intended to make the technology available at a low enough cost for mass deployment. Velodyne founder and CEO David Hall said:

“Lidar continues to prove itself as the critical sensor for safe autonomous vehicle operation. This investment will accelerate the cost reduction and scaling of Velodyne’s industry-leading lidar sensors, making them widely accessible and enabling mass deployment of fully autonomous vehicles.”

‘Transformational moment’
Ford CTO and VP of product development Raj Nair added: “From the very beginning of our autonomous vehicle program, we saw lidar as key enabler due to its sensing capabilities and how it complements radar and cameras.

“Ford has a long-standing relationship with Velodyne and our investment is a clear sign of our commitment to making autonomous vehicles available for consumers around the world.”

While Google's intentions in the automotive sector are well known in the West, its Chinese rival Baidu is making similar moves, with a fleet of its autonomous vehicles already being tested in China.

Just a month ago, lidar mapping start-up Civil Maps also revealed that it had received investment from Ford, while the US firm is also working closely with leading academic groups at Stanford, the Massachusetts Institute of Technology (MIT) and Aachen University.