Femtosecond pulsed lasers could be set to make a major impact in industrial manufacturing applications for the first time, thanks to the latest developments at the Fraunhofer Institute for Laser Technology (ILT).

A team of ILT scientists led by Peter Russbüldt has become the first to produce an ultrafast laser with an average output power in excess of a kilowatt. Based on the ILT’s existing “Innoslab” amplifier design featuring a diode-pumped ytterbium-doped KGW femtosecond oscillator and a YAG crystal amplifier, the team measured average output of 1.1 kW from their 615 fs pulsed laser by cascading two amplifiers.

Publishing their latest results in a forthcoming issue of the online journal Optics Express, they also measured a beam quality (M2) of 1.43 in the x-direction and 1.35 in the y-direction with a single amplifier; and a peak power of 80 MW for a single linearly polarized beam from the cascaded design, operated at room temperature. Those results suggest that the kind of throughput needed in the industrial environment can be achieved with femtosecond sources. 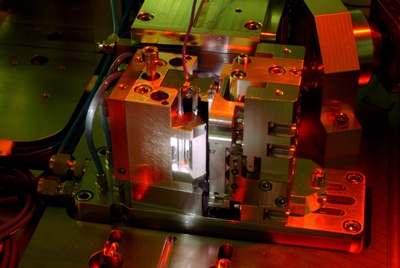 In comparison, the StarFemto ultrafast laser from Rofin-Sinar, which is one of the only industrial-grade femtosecond lasers to have become available so far, has a quoted average power of 6 W from 800 fs pulses when operated at 200 kHz.

Because they apply energy in such a precise and short manner, ultrafast pulses can be used to ablate material without transferring any heat to the target. As such, they have always been seen as highly suited to precision engineering, but their relatively low overall power delivery means that throughput has remained a problem until now - even though femtosecond sources are regularly used in scientific and medical applications.

New image for femtosecond lasers
“Thanks to this new power output, the femtosecond laser [will] slowly depart from its image as a scientifically complicated toy,” said Russbüldt. “The higher power means the throughput also increases in production, which, in turn, means an enormous time and cost advantage for manufacturers.”

“The femtosecond laser can now be applied in fields in which its throughput did not suffice in the past,” added the project leader, suggesting processes for manufacturing lightweight components based on composite fiber material as a likely avenue for commercial exploitation. Rofin suggests materials such as nitinol shape-memory alloys and bio-absorbable polymers like polylactic acids or polyglycolic acids as likely applications for its StarFemto system.

Because the ultrashort pulses from a femtosecond laser do not impart any heat to the target material, they can be used to process any type of material, regardless of its specific characteristics. Nozzle drilling, solar cell engineering and printing are all seen as likely applications.

The key development that has enabled the scale-up from the ILT team’s previous best of 400 W average power is the availability of higher-power diodes with good beam quality. “The step from 400 W to 1.1 kW has been achieved by replacing the pump diodes with more powerful ones – which yield 620 W instead of 400 W for one amplifier,” Johannes Weitenberg from ILT told optics.org. The other major development was to cascade two amplifiers to reach the higher level – with a single amplifier the average power was 620 W, scaling up to 1.1 kW with two.

Weitenberg adds that the cost per Watt of the Innoslab design becomes more competitive at a high output power, meaning that the development is likely to accelerate the industrial deployment of ultrafast lasers. “The amplification of pulses with an energy of more than 100 µJ – which is appropriate for most ablation applications – is [now] possible without the use of chirped pulse amplification (CPA),” he said. “The master oscillator – power amplifier (MOPA) system allows a great flexibility with respect to repetition rate, pulse length and energy.”

In terms of future commercial development, the Innoslab lasers are already being sold by ILT spin-out company Amphos, which is based close to the institute in Aachen and already lists 500 W, 800 W and 1 kW average-power ultrafast lasers among its products. Along with ILT, Amphos will be exhibiting at the forthcoming SPIE Photonics West show in San Francisco, California.

• On April 13-14 next year, Fraunhofer ILT will hold a workshop on the topic of industrial femtosecond laser applications in materials processing, with a focus on technological developments and market potential.