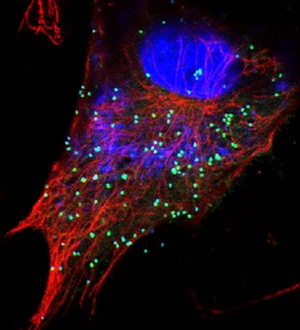 Using two-photon-induced fluorescence resonance energy transfer (FRET) allows the team, led by scientists at Oxford Brookes University, to study molecular interaction between the vaccines and chicken cells in greater depth and for a longer period of time than conventional approaches – as reported in the December 2010 issue of the Journal of Virology.

Genetically modified viruses known as “fowlpox” are already used extensively to vaccinate chickens against bird flu in Mexico and southeast Asia, and are known to be good at protecting individual chickens from the deadly virus. But as Mike Skinner, one of the paper authors and now at Imperial College, London, explains, they could be made more effective:

“The current generation of fowlpox-based vaccines are really good at stopping chickens from getting ill when they come into contact with flu, but they don’t always stop the birds from getting infected,” Skinner said. Because of this, around a quarter of vaccinated birds still carry the disease and can pass it on to others. “Our hope is that we can engineer a new vaccine that makes this much less likely.”

To help find out why existing vaccines don’t stimulate the part of a chicken’s immune system that would normally fight off infected cells, the investigators turned to a laser-based technique developed by Stan Botchway and others at the CLF, part of the UK Science and Technology Facilities Council's (STFC) Rutherford-Appleton Laboratory.

Molecular interactions
Botchway, also listed as an author on the Journal of Virology paper, has developed FRET within the CLF’s Lasers for Science activity. The technique allows scientists to study direct interactions between molecules when they are in close proximity.

Standard fluorescence microscopy involves absorption of light at one wavelength and subsequent red-shifted emission from molecules under investigation. Different molecules can be labelled with fluorescent markers, but it is usually impossible to determine whether or not any direct interaction has taken place between them.

The key advantage with the more complex FRET approach is that it can detect a transfer of energy between molecules when one of them has been put into an excited state by absorption of light from a laser. Energy is transferred from one molecule to another non-radiatively, and that transfer can be detected by closely observing the fluorescence of the donor and acceptor molecules – for example by measuring changes in fluorescence lifetimes. Crucially, that radiationless energy transfer is only possible over a distance of about 10 nm – meaning that FRET can also be used as a kind of molecular ruler.

Botchway explains that by using an infrared laser, the team was able to see deeper into cells and tissues, and observe samples over an extended period of time without causing any damage. “This allows us to observe how all of the different proteins interact, without disturbing the process by firing high-energy lasers at them,” he said.

With more than five billion poultry in China alone, vaccination is a key tool in attempts to contain avian flu, and an estimated two billion doses of the fowlpox-based vaccines have already been used, according to STFC. But even that has been unable to completely contain the virus, and the current H5N1 strain is regarded as both highly contagious and dangerous in birds, with at least 200 million thought to have been killed or culled because of it.

The H5N1 virus has also infected the human population, with more than 500 cases identified globally and some 300 deaths, mostly in rural Asia.

• The work has been carried out as a part of the Combating Avian Influenza Initiative, which aims to increase understanding of how avian influenza interacts with its animal hosts, in order to control its spread more effectively.