ReVision Optics applies to expand a clinical trial of tiny implants that treat presbyopia, the age-related loss of near vision. 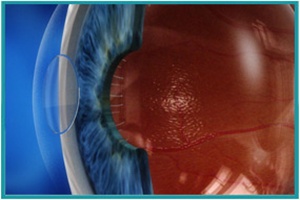 Reading glasses may become a thing of the past if a clinical trial of implantable lenses goes according to plan. ReVison Optics (RVO), a California-based company that is developing the lens technology, has just filed for an expansion of the first phase of the trial.

So far, RVO has completed enrollment and initial follow-up as part of the first phase of the US Food & Drug Administration (FDA) trial. The next stage will see 400 people fitted with the implants in a three-year study.

Presbyopia, the loss of near-term vision with age, affects everybody. “When people become older, their eyes naturally lose the ability to focus, which typically happens around age 45,” says RVO. “Currently, more than 73 million people in the US are presbyopic.”

The company has developed the “Vue+” microlens as a novel approach to the problem, as an alternative to the need for reading glasses. The device is similar to a contact lens, except that it is placed just below the surface of the eye, instead of on top of it.

RVO says that the lens is made from a proprietary transparent, medical-grade hydrogel that is optically very similar to the natural cornea. “The lens is designed to slightly change the corneal curvature, to improve near or reading vision,” explained the company.

Interestingly, RVO is headed up by CEO and president Randy Alexander – previously the CEO of femtosecond laser eye surgery pioneer IntraLase. Alexander helped to raise $75 million in capital while at IntraLase, which was subsequently sold to Abbott Medical Optics.

Increased focusing power
At just 2 mm in diameter and thinner than a human hair, the implant is much smaller than a conventional contact lens, however. “Very small changes in the surface of the cornea can have significant effects on the eye’s focusing power,” RVO says on its web site. “The Vue+ is designed to add a microscopic change in the curvature of the cornea for increased focusing power. A similar principle is used to reshape the eye with refractive surgery.”

The short procedure for implanting the lens also involves a laser, which is used to prepare the patient’s cornea. “Improvement in near vision usually begins to be evident almost immediately,” states RVO, adding that the lens provides a correction of about +2.0 diopters.

Early studies performed in Mexico have shown good results, with all patients showing “excellent near and intermediate visual acuity” and 20/25 vision or better at distance. Only one adverse event was reported in the early study, and this was resolved simply by re-positioning the implanted lens.

Curiously, the lens is only implanted to one of the patient’s eyes. RVO explains that it is placed in the non-dominant eye, so that it does not interfere with distance vision in the patient’s dominant eye.

The RVO approach is not the only high-tech treatment for presbyopia currently being investigated. Another clinical trial involving approximately 100 patients is also under way in the US, this time using refractive eye surgery similar to the LASIK procedure that is widely used to treat short-sightedness.

The “PresbyLASIK” trial, which is being organized by the University of California, San Diego, is currently in the recruitment phase, but is expected to be completed by the end of this year. The idea is to create a multi-focal surface that is able to correct any visual defect for distance, while simultaneously doing away with the need for reading glasses.

“The idea of a creating a multifocal cornea using refractive surgery has sparked tremendous interest in finding a solution for this growing population throughout the world, especially amongst surgeons and the ophthalmic industry,” states the FDA document describing the trial, which will use Wavelight’s Allegretto system.