Combination of Raman spectroscopy and digital imaging identified patients who went on to develop metastatic form of prostate cancer. 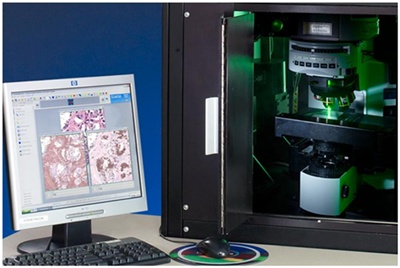 Raman molecule imaging (RMI) has the potential to predict the progression of prostate cancer. That’s the bold claim being made by US company ChemImage, which has just completed a pilot clinical trial in collaboration with the Mayo Clinic Department of Urology.

The team found that RMI could successfully distinguish the chemical differences between patients who progressed to the metastatic stage of the disease, and those who had no sign of the cancer after their prostate had been removed.

“We anticipate that Raman will become a tool pathologists can use to improve their diagnoses,” John Maier, Vice President of Biomedical Research at ChemImage, told optics.org. “In some situations, the limitations of the tools a pathologist has impedes their ability to answer relevant questions about disease -- predicting the future course of prostate cancer is an example. Raman can potentially provide currently unavailable prognostic information.”

RMI combines digital imaging and spectroscopy to evaluate the biochemical composition of a sample. Standard techniques in clinical diagnostics typically involve the use of complex molecular reagents to identify genes or proteins that are present in a tissue.

Raman, on the other hand, has the advantage that scattering is measured directly from the molecules that constitute the tissue. This information is then used to judge the physiological state of the tissue and, in the case of prostate cancer, the course that the disease will take.

Gathering clinical evidence
The 38 patients involved in the clinical trial were split into two groups. The “progressors”, who developed metastatic cancer within five years of having their prostate removed, and the “non-progressors” - who showed no evidence of the disease in the five years following the removal of their prostate. It is important to note that this was a retrospective study, so both the diagnosis at the time of prostate removal and the outcome of the patient five years after removal were known.

The team examined tissue samples (5µm thick sections) using ChemImage’s FALCON II Raman imaging microscope and analyzed the data using the company’s Xpert software, which employs principal-component analysis to highlight the most significant differences in the gathered Raman spectra. A key factor in choosing this combination of technology was the ability of the Falcon II to deliver an image of the full field of view.

The Raman microscope uses a Nd:YVO4 laser emitting at 532 nm and a liquid-crystal tunable filter to obtain images formed by Raman-scattered light at specific wavelength shifts. “We collected data over the range of 500 to 3200 relative wavenumbers,” commented Maier. “The Raman signatures from the tissues were different for the two patient groups. The best correlation with the disease outcome was in the region between 870 and 1810 wavenumbers. The signals arising from the epithelial cells were the most powerful in differentiating the progressors from the non-progressors.”

Following this successful initial trial, Maier and colleagues are now looking to verify their results through similar experiments with other clinical institutions. “If our results hold up in future work, this method could be used to predict the course of prostate cancer,” he said. “We plan to continue this research on prostate cancer, as well as investigating the application of RMI to other cancers such as lung and kidney. In principle, this technique would work in vivo, but that would bring a new set of practical challenges. For now, we are focused on the microscopic analysis of thin tissue sections in the area of pathology.”

The complete results of this study were published in the August 11 issue of the British Journal of Urology International in an article entitled “Raman spectral imaging of prostate cancer: can Raman molecular imaging be used to augment standard histopathology?”