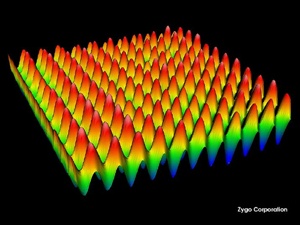 Benefiting from the resurgent semiconductor and strong life science markets, optical system and component vendor Zygo has reported a surge in bookings in its latest financial results.

But over that same period, bookings more than doubled, rising 121 percent to $32.7 million in the latest quarter. Those bookings included a $3.1 million follow-on order for the company's optics division to fabricate a "large slab laser fusion amplifier".

Zygo CEO Chris Koliopoulos, who joined the company in January 2010 and has since become chairman of the Zygo board also, said of the recovery: "The increasing booking trends are very encouraging, as we believe the markets we participate in are continuing to strengthen."

One of those markets is semiconductor manufacturing, and Koliopoulos indicated that the signs from lithography tool customers remained positive, with sustained demand expected to continue into 2011. Zygo received $5.9 million in bookings for semiconductor equipment metrology systems in the recent quarter, rising for the fourth consecutive period.

DNA sequencing
Another growing market for Zygo is life sciences, where the company sells products into dental and ophthalmology applications. But more recently, Zygo has seen demand pick up for products from companies specializing in DNA sequencing applications.

In the latest quarter, Zygo also posted its first profit for nearly two years, with net earnings of $4.1 million. That compares with a net loss of $47.3 million in the final quarter of fiscal 2009, and illustrates the strength of the turnaround.

"Through improving economic conditions and the good efforts of our workforce, we believe Zygo has turned the corner and expect to see continuing growth in our businesses for the next quarter," added Koliopoulos.

Part of the reason behind that swing to profitability was Zygo's cost-cutting measures, which have helped to improve gross margins in recent quarters.