Aiming for clinical trials in 2013, an Israeli start-up's neuron-stimulating synthetic retina is powered by spectacles featuring an infrared laser. 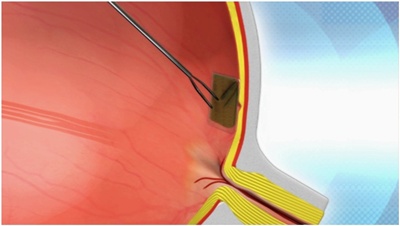 Nano Retina is a start-up company with a bold mission: to restore sight to anyone suffering from retinal degenerative disease. Despite the daunting and complex nature of such a task, the company is confident that it can succeed and is working with a global network of collaborators to make the goal of sight restoration a reality.

Age-related macular degeneration (AMD) is one of the leading causes of degenerative blindness. “Millions of people around the world suffer from retinal degeneration and they are all searching for a solution, but currently there is none,” Ra’anan Gefen, Nano Retina’s managing director, told optics.org. “We want to change this situation, and when we reach this stage, it will be a huge contribution to humanity.”

Nano Retina’s solution is a tiny implant that is inserted into the eye and attached to the retina in a minimally invasive procedure no more complicated than conventional cataract surgery. The implant consists of photodetectors, microelectrodes and electronic circuitry that act together to replace the eye’s natural photoreceptors that have been damaged by AMD and feed visual information to the brain. A simple concept, but an overwhelming technical challenge.

From idea to reality
The Nano Retina concept, the bio-retina, is the brainchild of prolific inventor and entrepreneur Yossi Gross. “We believe that the concept is different from other ideas in this area,” commented Gefen. “We want the implant to give everyday functional benefits back to the patient, such as the ability to do daily work, eat and interact with people. It also provides a natural solution where all of the normal mechanisms of the eye are maintained.”

When Gross met Jim Von Ehr of US-based Zyvex Laboratories there was an instant match between Gross’s idea and the nanotechnology and manufacturing expertise available at Zyvex. The duo joined forces and formed Nano Retina. Based in Israel, the company has been operating for two years, refining Gross’s original idea and pioneering the technology to make it viable.

The photoreceptors in a healthy retina convert light into a series of electrical signals which are transmitted to the brain via complex neural pathways. In the case of AMD, the photoreceptors do not function, which prevents the brain from receiving these signals from the eyes. This is where the bio-retina comes in.

The bio-retina implant is essentially a combined imaging circuit and neural interface which is glued rather than sutured to a patient’s macula – the area of the retina responsible for high-resolution central vision. Measuring 3 x 4 mm and 1 mm thick, the implant is designed to capture light through the normal optical track of the eyeball and stimulate neurons to transmit information to the brain, essentially restoring the function of the damaged photoreceptors. 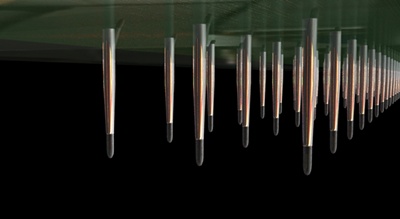 Neural language
Light incident on the implant is collected by an array of CMOS pixels. The first-generation bio-retina will use an array of 600 pixels, although the aim is to increase this to 5000 pixels in future generations. With the visual information collected, this immediately gives rise to one of the many technical challenges facing the Nano Retina team – how is information sent to the neurons?

“Nano Retina has dedicated a substantial amount of time developing a proprietary algorithm that translates the received visual information and image into the neuron language,” commented Gefen. “We have translating circuitry that discriminates 100 gray-scale levels and responds to varying light levels. It is a sophisticated process.”

But this is only half of the problem. In order to transmit the information to the neurons, you need to connect to them. To do this, the implant uses an array of micro-electrodes that first penetrate into the retina, then connect closely to the neurons and thereafter transmit the information. The goal is that every pixel will connect to a neuron, so that every pixel in the array would use a micro-electrode.

However, transmitting information to the neurons is not a passive process. The neurons must be stimulated electrically, meaning that the bio-retina implant also requires a source of electrical power. As is the case for all of the challenges faced by Nano Retina, the company believes it has come up with an elegant solution:

Patients who undergo surgery to implant a bio-retina will need to wear a special set of glasses. These glasses feature a built-in battery and an infrared diode laser. “The infrared laser light is transmitted into the eye and captured by a miniature photovoltaic cell on the bio-retina,” explained Gefen. “The photovoltaic cell harvests the energy, which in turn powers the electronic circuitry. Our goal is for the imager and the electronics to consume no more than 1mW.” 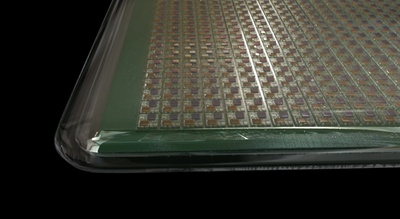 Clinical trials
Nano Retina is currently co-operating with a worldwide network of companies and research institutes to bring together all the different elements of its design. For example, Zyvex Laboratories in Dallas, Texas, has taken on the immense task of nano-machining the micro-electrode array, while the Swiss Center for Electronics and Microtechnology (CSEM) in Neuchâtel joined the team in February 2011, and will concentrate on electrical design and very-large-scale integration (VLSI) of the device.

“We validated the critical elements last year and are now focused on developing them further. We intend to have them at hand later this year so that we can demonstrate their function,” said Gefen. “We will then aim to start clinical trials in 2013.

Depending on the success of the trials, we hope to begin introducing our product to the market in around two or three more years. We are all crossing our fingers that Nano Retina will soon achieve its ambitious quest to return functional sight to the blind.”