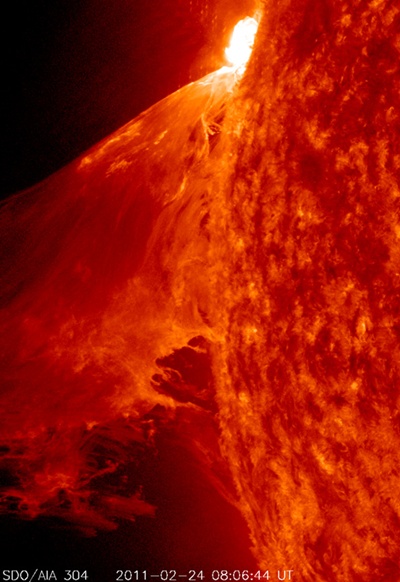 NASA’s Solar Dynamics Observatory (SDO) has captured spectacular images of a solar flare, thanks in part to detector components supplied by the UK company e2v.

The eruption, which produced a twisting mass of plasma over the course of 90 minutes, took place on February 24, with some of the matter ejected into space and the rest falling back into the Sun.

A remarkable video of the event shows images captured in the extreme ultraviolet (EUV) portion of the spectrum every 24 seconds by SDO.

e2v supplied four of its CCD203-82 detectors for the SDO's Atmospheric Imaging Assembly (AIA), and two for its Helioseismic and Magnetic Imager (HMI). The AIA instrument – built by Lockheed Martin Solar and Astrophysics Laboratory - is an array of four telescopes that can produce high-definition images of the Sun in eight out of ten different wavelengths, every ten seconds. Nine of the ten bands are in the ultraviolet and EUV regions.

Multiple wavelengths
It is this high imaging rate at multiple wavelengths that sets the SDO apart from previous instruments used to study the Sun, and the images should help researchers to learn more about the development of storms near to its surface. Those storms directly impact the Earth, for example causing phenomema such as the Northern Lights.

Aside from that well-known effect, the Sun’s emission of EUV photons is described by SDO’s scientists as the dominant source of heating for the Earth’s upper atmosphere. “When the Sun is active, EUV emissions can rise and fall by factors of hundreds to thousands in just a matter of seconds,” they explain.

“These surges heat the upper atmosphere, puffing it up and increasing the drag on man-made satellites. EUV photons can also break the bonds of atmospheric molecules [and ionize atoms], creating a layer of ions that alters and sometimes severely disturbs radio communications and GPS navigation.”

The SDO scientists will be gearing up for more spectacular shows like this over the coming months and years. That’s because the Sun is currently waking up from a period of relative calm, with sunspot activity and eruptions on the increase after reaching a low in 2009. Activity is expected to peak in 2013, in line with the Sun’s typical eleven-year cycle.

However, that cycle is not particularly predictable, and certainly does not indicate when the next major solar storm will arrive, and the SDO scientists will be hoping that observations such as this latest one will help to provide a deeper understanding of the Sun's inner workings.

SDO was launched just over a year ago. Of the six detectors supplied by e2v, the four used in the AIA instrument are back-illuminated CCDs sensitive to EUV wavelengths and used to observe the Sun from 9.4 to 170 nm. The two front-illuminated sensors on board the HMI instrument are sensitive in the Sun's familiar orange-red range at 617 nm. Camera electronics for each of the sensors were provided by the UK Rutherford Appleton Laboratory.