Munich luminaire is better by design 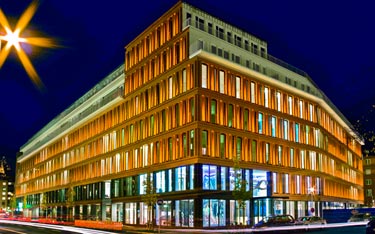 State-of-the-art LED technology and tailored free-form optics developed by German optical design house OEC are the mainstay of a new, energy-saving luminaire that's lighting up the Angerhof building in Munich. The illuminated facade of the public building, conceived by the Munich-based artist and designer Ingo Maurer, consumes only 2 kW of power, equivalent to the rating of a domestic kettle.

Maurer provided a demanding brief to the OEC design team, which was led by Andreas Timinger. For example, only a portion of the window "reveal" of the terracotta-coloured facade is illuminated – an arrangement that helps to emphasize the architectural structure and prevent illumination from spilling into the building interior. Maurer's specification also rules out the use of high-power lighting on the facade.

The luminaire's core optical element is a custom-built reflector that's injection-moulded in plastic. Hundreds of these reflectors (each approximately 5 cm high) help to illuminate the Angerhof facade.

"An integrating rod together with a free-form mirror form the optical system of the luminaire," Timinger told optics.org. "The integrator is a hollow structure mixing the light of two LEDs of different colours. The free-form mirror directs the light emerging from the integrator onto the target surface, an elongated strip of 20 cm width and approximately 3 m length."

Right now, the main applications for free-form optics are in streetlamps and automotive rear lighting and headlamps. "Free-form optics allow you to direct light into beam patterns which are impossible with standard optical surfaces, such as spheres, paraboloids or other aspheres," explained Timinger. "[However], because the degrees of freedom are virtually infinite, the design of free-form optics is a significant challenge and the resulting surfaces impose complex and precise steps in tooling and manufacturing."

This is where OEC claims to have an edge, with a straightforward method of 3D tailoring for free-form optics design. Essentially the optical task of directing the light is translated into a set of differential equations, with the solution to these equations being a smooth surface without steps or kinks. "The manufacturing challenge is reduced to a single, smooth free-form surface represented in standard CAD formats," said Timinger.

OEC reckons that the technology developed for the Angerhof project could also find applications in the energy-saving illumination of sales areas, supermarket refrigerators, museum paintings and in LED street lighting.