A camera that can take photos 1000 times faster than competitors could bring dynamical physics into focus. 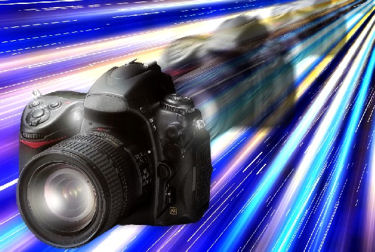 US researchers have developed a new type of camera that can take photos more than 1000 times faster than conventional cameras. Its creators at the University of California, Los Angeles (UCLA) say that the device is set to become an indispensable tool for studying dynamic processes like shockwaves, communication between living cells and laser surgery.

The key to this new camera is its ability to produce high-quality images using just a single-pixel light detector. This is made possible with a new imaging technique that both captures and amplifies light within the same unified process. The UCLA team showcased the camera by taking snapshots of a surgical laser technique at a significantly faster rate than is possible with the best digital camera on the market.

"Our camera overcomes the fundamental trade-off between sensitivity and speed without resorting to high-intensity illumination that can damage the sample being imaged," said Keisuke Goda, one of the UCLA researchers.

In conventional digital imaging, such as CCD and CMOS cameras, the rate at which images are produced is restricted by the time it takes to read data from an array of millions of sensors. Also, as you increase the shutter speed, you are reducing the amount of light that reaches the sensors resulting in images of limited quality. "To put it simply, when you are taking a picture, you can't collect enough light from an object if the exposure time is short," said Goda.

To get around this compromise, the UCLA researchers have developed a new technology which they refer to as STEAM – "serial time-encoded amplified microscopy". STEAM works by freezing images using an optical rather than an electronic process. At its heart, a single-pixel photodiode and oscilloscope capture a stream of one dimensional time-varying data then convert this into high-quality two dimensional images.

Presenting their findings in Nature, the scientists used their camera to record laser ablation – a technique used in surgery to remove targeted areas without damaging near-by tissue. The ablation was performed with a mid-infrared pulse laser focused on a silicon substrate coated with aluminium foil. The camera, normally incident to the substrate surface, was able to capture the particle ejection at a frame rate of 6.1 MHz, where high-end digital cameras can manage only 1 kHz.

Snapshot of the future

Despite this success, Goda believes that there is still much room for development. Even though the camera uses a state-of-the-art ADC, the quality of images is still restricted somewhat by the conversion of analogue to digital signals. However, whereas conventional digital cameras will never overcome this problem, STEAM could be adapted to segment an optical image into several channels and then detect these using an array of detectors.

"This work is interesting and exciting...it will be fascinating to see the upper limit on the amplification they can achieve," said Changhui Yang, a biophotonics researcher at Caltech.

Ala L Hijazi, an optics researcher at Hashemite University in Japan commented that he is similarly impressed, but he also warned that STEAM technology may be limited to high speed applications. "There would be concern about using such a device for obtaining quantitative 2D mapping such as PIV or spray analysis," he said.

• This article first appeared on our sister website physicsworld.com