optics.org speaks to the researchers that have created what they say is the first directly diode-pumped terawatt laser. 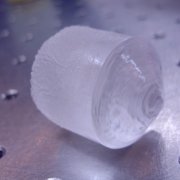 A team of researchers from Germany has published details of what it believes is the first direct diode-pumped laser to produce terawatt peak powers. The system relies on a ytterbium-doped calcium fluoride (Yb:CaF2) crystal to amplify femtosecond pulses to the terawatt level, a milestone of particular interest to the laser fusion community (Optics Letters 33 2770).

Alternative ways of reaching the terawatt regime are high-energy Nd:glass or short-pulse Ti:Sapphire laser systems, although both of these methods rely on mature flash-lamp technology.

"A directly diode-pumped approach promises the highest efficiency so far, but we are still at the beginning of this work," Mathias Siebold of the Friedrich-Schiller University told optics.org. "A laser diode has an electrical-to-optical conversion efficiency of around 60% whereas a flash lamp gives only a few percent."

Siebold and his colleagues opted to use Yb:CaF2 due to its low quantum defect and its long fluorescent lifetime. Other desirable properties include the ability to grow large volumes of the crystal up to 20 cm in diameter and a broad gain spectrum.

The heart of the system is a ten-pass amplifier based on Yb:CaF2, which is pumped by two diode laser stacks emitting at 940 nm. The amplifier itself is seeded by either a two-stage chirped pulse Yb:glass MOPA (which the team refers to as the pre-amplifiers of POLARIS or the POLARIS front end) or a Q-switched nanosecond Yb:YAG MOPA.

"The POLARIS front end allows us to demonstrate the terawatt peak power pulses," explained Siebold. "I also wanted to show high pulse energy. Our Q-switched MOPA delivers a higher seed energy to saturate the gain of the ten-pass amplifier. In order to show the potential of Yb:CaF2, the pulses from the Yb:YAG-MOPA (6ns) are similar to typical pulses used for laser fusion experiments (10ns, low bandwidth)." 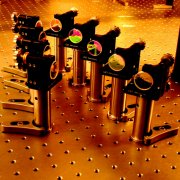 The team produced 192 femtosecond pulses with a pulse energy of 197 mJ (corresponding to a peak power of 1 TW) using the POLARIS front end. It was also able to amplify nanosecond pulses from the Q-switched MOPA to the joule level.

"With improvement of its optical quality, Yb:CaF2 will be a promising gain medium for future ultrahigh-peak power diode-pumped laser systems," concluded Siebold. "We will also cryogenically cool the gain medium and use shorter pump pulses. We expect an optical-to-optical efficiency of 15 to 20% from our system in the future."