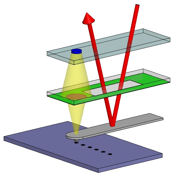 The first scanning near-field optical microscope (SNOM) with an LED integrated into the probe has been unveiled by researchers at the University of Sheffield, UK. According to the team, the device is easy-to-use and can be incorporated into most commercial atomic force microscopes (AFMs) for powerful near-field optical imaging at high resolution (Applied Physics Letters 93 213103).

"We have shown that SNOM optics don't have to be big and cumbersome but can be shrunk down to just a few millimetres in size," James Kingsley, of the university's Department of Physics and Astronomy, told optics.org. "We have combined a GaN LED, microlens and cantilever into a micro-optics system that could make SNOM a routine lab-based analytical tool."

According to Kingsley, the main applications of the 1mm probe include imaging for the life-sciences industry and materials research. The device could also be desirable for lithography applications where it could be used for prototyping nanodevices and creating nano-patterned surfaces.

SNOM is currently perceived as a rather difficult technique to use, involving careful focussing and alignment of illuminating optics. Previous attempts at building probes with an integrated light source have involved attaching the light source directly onto the cantilever. According to Kingsley, such designs suffer serious drawbacks.

"This approach leads to a compromise in the wavelength of light that can be generated, the resolution that can be achieved or the practicality of the device manufacture," he said. "Our approach solves all these problems as the LED is positioned remotely from the cantilever by a few hundred microns, with the light delivered via a micro-optics system."

In the setup, a UV GaN LED is integrated directly into the probe, which means that the optics are pre-aligned, resulting in a compact tool that can be easily retro-fitted into existing AFMs. An added advantage is that it allows the user to simply swap LEDs for sample analysis at different wavelengths.

"We mounted a 50 micron diameter high brightness LED to one side of a glass substrate. On the other side we fabricate a microlens with a diameter of around 100microns," explained Kingsley. "The SNOM cantilever is mounted with the aperture at the focus of the microlens. Light from the LED is collected by the microlens and focussed at the aperture of the tip."

The next step for the team is to improve the collection efficiency of its system, which would allow more optical power to be delivered into the SNOM aperture.