Research into they way shrimp view the world is giving scientists a better understanding of imaging with polarized light. 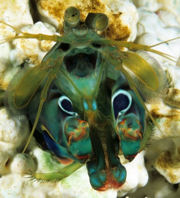 The eyes have it

Scientists in Germany and Australia have discovered that shrimps can detect both linearly and circularly polarized light. The group hopes that studying the response of photoreceptors in a shrimp's eyes could lead to a better understanding of polarized light vision.

Scientists have known for at least 50 years that some insects, crustaceans, spiders and other anthropods can "see" light of different polarizations – without the need for any artificial aids. These animals can even use this ability to navigate, find food and evade predators. But biophysicists had thought that this ability was only true for linearly polarized light, in which the electric-field vector points in a fixed direction.

Such animals, it was thought, could not detect circularly polarized light, in which the electric field vector rotates in a clockwise or anticlockwise direction. This belief was based mostly on the observation that as there are very few sources of circularly polarized light in nature, detecting it would not be of much use and it would be unlikely that any animal had evolved the ability to do so.

Simultaneous detection
Now, Sonja Kleinlogel of the Max Planck Institute for Biophysics in Frankfurt and Andrew White of the University of Queensland have carried out experiments on the eyes of mantis shrimp that show how the crustacean can detect simultaneously both circular and linear polarization of light.

This new analysis backs up a report made earlier this year by Kleinlogel and colleagues in Australia and the US that live mantis shrimp behave differently when exposed to light of different circular polarization (Current Biology 18 429).

In their new experiments, Kleinlogel and White made a series of measurements on eyes that had been removed from mantis shrimp. These creatures have two spherical compound eyes, each of which comprises hundreds of smaller eyes organized into three substructures – two hemispheres separated by a mid-band.

An 'artificial mantis shrimp eye' would give us a great opportunity to figure out what these little critters really perceive in their environmentSonja Kleinlogel, Max Planck Institute for Biophysics

This ability to visualize all types of polarization allows the shrimp to perceive very subtle changes in the polarization, claims the team, which could improve their view of their environment. "Some of the animals that the [mantis shrimp] like to eat are transparent, and quite hard to see in sea-water – except that they're packed full of polarizing sugars – which makes them light up like Christmas trees as far as these shrimp are concerned," explained Kleinlogel.

Another team of researchers at Queensland have recently shown that light reflecting from mantis shrimp is circularly polarized, suggesting that the polarization vision is involved in the mating process.

Nick Roberts, who is a biophysicist at the UK's University of Manchester, described the work as "persuasive". He also pointed out that the team's novel measurement and analysis technique, which involves using six measurements to define uniquely the response of different parts of the eye, was an important contribution to the understanding of polarized light vision.

Shrimp's-eye view
Kleinlogel said that the team now plan to build an "artificial mantis shrimp eye" – a camera that would have a shrimp's-eye view of Australia's Great Barrier Reef, which is home to the crustacean. "This would give us a great opportunity to figure out what these little critters really perceive in their environment," she said.
RELATED LINKS