Medical images that can be uploaded onto a mobile phone and transmitted to health professionals for analysis could help make diagnosis and treatment more accessible. 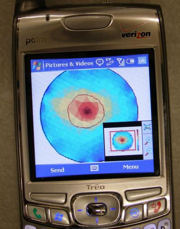 Researchers from the Hebrew University of Jerusalem and the University of California, Berkeley, have developed a way to transmit medical data and images via mobile phone. The scheme, they claim, could potentially provide sophisticated radiological diagnoses and treatment to millions of people in the world's poorest regions (PLoS ONE 3 e2075).

"Imaging is considered one of the most important achievements in modern medicine," said team leader Boris Rubinsky. "Diagnosis and treatment of an estimated 20% of diseases would benefit from medical imaging, yet this advancement has been out of reach for millions of people in the world because the equipment is too costly to maintain. Our system would make imaging technology inexpensive and accessible for these underserved populations."


Conventional medical imaging systems are generally self-contained units that combine three components: the data acquisition hardware, the image processing system and an image display unit. These systems are often expensive and require experienced users to operate and maintain them. Even when such equipment does exist in developing countries, often it's not actually used.

The team came up with the idea of physically separating the three components to yield a robust medical imaging system that would be less expensive and could be used by less rigorously trained personnel. The scheme involves locating the most complicated element - the data processing and image reconstruction hardware and software - at a central location that could serve multiple remote sites.

With data processing performed elsewhere, only the acquisition device used to collect the raw data needs to reside at the patient site. The unprocessed data are transmitted via mobile phone to the central server, which processes the raw data and sends the resulting image back to the patient's location. Here, the processed image can be viewed on the mobile phone screen and analysed by local physicians.

"This design significantly lowers the cost of medical imaging because the apparatus at the patient site is greatly simplified, and there is no need for personnel highly trained in imaging processing," said co-author Antoni Ivorra. "The data acquisition device can be made with off-the-shelf parts that somebody with basic technical training can operate. As for cell phones, you could be out in the middle of a remote village and still have access. They're so prevalent because so little infrastructure is required to maintain wireless networks."


Rubinsky and colleagues tested the feasibility of the scheme by using electrical impedance tomography (EIT) to image a simulated tumour. EIT exploits the principle that diseased tissue transmits electrical currents in a different way to healthy tissue. Images showing the variation in electrical resistance across a target region can used, for example, to detect tumours or monitor minimally invasive surgical procedures.

The team used off-the-shelf components to construct a simple data acquisition device containing 32 stainless-steel electrodes. Fifteen of these electrodes serve as current sources (at a range of frequencies), one as the current sink and the other 16 are used for voltage measurements. The device was connected to a gel-filled container that simulated breast tissue with a tumour and used to record 225 voltage measurements.

The researchers uploaded the measurements to a mobile phone, which sent the raw data to the central facility for processing. The resulting image - viewed on the mobile phone screen - clearly showed the simulated tumour. According to the researchers, the system should work with any mobile phone that's capable of sending and receiving multimedia messages.

According to World Health Organization reports, around three-quarters of the world's population currently have no access to medical imaging technologies. Often, however, remote communities do have access to mobile phones: it's estimated that over 60% of mobile phone usage is in developing countries. This prevalence of mobile phones was picked up upon by US-Israeli researchers, who decided to exploit mobile connectivity to bring medical imaging to underserved areas.

"This could open up whole new avenues of health care for the developing world," said Rubinsky. "Health professionals in rural clinics could affordably get the tools they need to properly diagnose and treat their patients. In my opinion, this concept would be valuable for developed nations as well. It may be worthwhile to consider this as a way of reducing the cost of medical imaging."