A new method for analysing the illumination pattern of car headlights combines a CCD photometer with custom software. 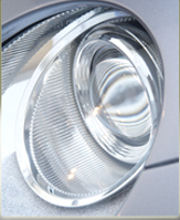 A collaboration between Pro-Lite, a UK company specializing in optical test and measurement, and lighting supplier Ring Automotive has led to a novel use of a CCD imaging photodetector to measure the illuminance, chromaticity and colour temperature produced by car headlights.

"CCD cameras have been used to test beam patterns before, but we have configured our ProMetric camera to have high sensitivity, low noise and to correct image distortions," Robert Yeo of Pro-Lite Technology told optics.org. "Then we have used custom software specially written to automate the measurements. This combination is a novel innovation, allowing Ring Automotive to obtain measurements in a fraction of the time and at much lower cost than traditional methods."

Testing headlamps normally involves measuring illuminance at multiple points in the beam pattern, one angle at a time, but Yeo explained that the new method is more automated. "The clever part of our process is that the ProMetric camera and software locates the datum position, a point close to the low-beam cut-off, after which the grid of measurement points is applied automatically. This saves considerable time compared to a manual aiming of the beam, and also simplifies alignment since the software aligns itself with the presented beam pattern."

The process employs a ProMetric CCD imaging photometer that features a 1536x1024 pixel camera with spectral response accurately matched to the standard CIE tristimulus colour space. Radiant Imaging, the manufacturers of the photometer, developed additional software to automatically align the camera with the datum position in the illumination pattern and measure the illuminance at specified test points. 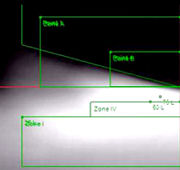 Traditional methods of headlamp analysis involve mounting the lamp on a motorized stage and using a goniometer to assess the light beam, an arrangement that normally requires 25 m of dark space for an accurate far-field measurement. "Our lab uses camera measurements at 10 m distance and the results are then scaled by the software, so it needs less space," said Yeo. The capital costs are also correspondingly lower.

Data quality is also improved, as the photometer makes an illuminance measurement much like taking a high-resolution digital photograph. "The picture is encoded with the illuminance and chromaticity of every point in the in the image," noted Yeo. "The imaging photometer can yield differences in illuminance and colour that goniometric measurements at fixed angles might well miss."

Yeo expects that the use of an imaging photometer to measure beam patterns will be of interest to the lighting industry as a whole, in particular the LED and solid-state lighting (SSL) sectors. "We have found considerable frustration in the SSL industry at the lack of readily accessible data from LED luminaires. By taking an illuminance map of the beam pattern projected onto a white screen, our camera can report intensity variations at different angles and produce industry-standard analyses for engineers designing light fixtures."

Balancing the luminance and colour of LED-based display backlights and screens should also be simpler, according to Yeo. "By viewing all the LEDs at once, it is possible to address the drive electronics to the LED array such that the overall luminance and colour balance are adjusted to fall within required limits, creating a much more uniform display that is more pleasing to the viewer."