Metamaterials are poised to impact every area of optics with their unusual and often surprising properties. Natasha Litchinitser and Vladimir Shalaev review recent progress and look at some of the potential applications of these fascinating materials

What is a metamaterial?

In the field of material engineering, the imagination of nature is said to be far greater than the imagination of man. The current progress in the field of electromagnetic metamaterials, however, seems to challenge this. Metamaterials have properties – such as a negative refractive index – that are not found in nature. They are characterized by simultaneously having a negative relative dielectric permittivity and a negative relative magnetic permeability. While this combination of properties is not found in nature, it does not contradict any fundamental laws of physics, so these materials can, and now do, exist.

The emergence of metamaterials has an impact on nearly all branches of modern optics and photonics from geometrical optics and diffraction theory to nonlinear and guided-waves optics. A plethora of remarkable effects and their potential applications has been theoretically predicted and analysed. Although not all of them can be immediately demonstrated in laboratory experiments, the current experimental progress was initially motivated by one such unusual finding – a superlensing effect. 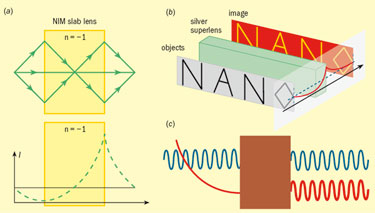 In 2000, John Pendry at Imperial College London, UK, discovered that a planar slab of negative index material (NIM) can radically improve the imaging resolution (see OLE February p15). Indeed, it was first pointed out in 1968 by Victor Veselago from the Lebedev Physics Institute in the former USSR that a planar slab of material with negative values for refractive index, dielectric permittivity and magnetic permeability surrounded by air can produce an image of a point source similar to a conventional lens. Pendry realized that such a slab not only focuses the propagating field components like an ordinary lens does but can also restore the evanescent field components, as schematically shown in figure 1(a).

Unfortunately, a superlensing effect is extremely sensitive to losses in the NIM slab. Nevertheless, applications that involve distances much smaller than a wavelength, such as near-field microscopy, may significantly benefit from a simplified version of a superlens, a so-called "poor man's superlens", which has a negative dielectric permittivity only, as shown in figure 1(b).

Negative dielectric permittivity alone is easier to realize since it is readily attainable in metals at optical frequencies. A thin slab of metal with permittivity equal and opposite to that of the surrounding media can be used as a poor man's superlens in the quasistatic limit. Such a superlens can form an image with subwavelength resolution in the near field.

Over the last few years, the idea of a superlens has evolved and several new schemes for achieving resolution beyond the diffraction limit using metamaterials have been proposed. While the majority of today's optical techniques for subwavelength imaging operate in the near field, a far-field superlens, or hyperlens (see figure 1(c)), could enable imaging beyond the diffraction limit in the far field. Instead of reamplifying the evanescent field components as in the original superlens, a hyperlens converts the evanescent waves into propagating waves that are consequently imaged by an ordinary microscope in the far field.

Using super- or hyper-lenses will bring many advantages. The majority of current imaging approaches use point-by-point imaging, while a superlens would allow an image of the entire sample to be captured in one shot. A superlens also enables images of buried structures resolved down to the subwavelength scale. This means that it will be possible to obtain high-resolution images of various types of nanostructures that cannot be directly assessed by a near-field probe, such as in scanning near-field optical microscopy.

Magnetic response
As well as a negative value for the refractive index, other properties including chirality and a strong magnetic response over the entire visible range have been demonstrated. Chiral metamaterials enable the polarization state of light in the near- and far-field to be controlled.

Metamaterials can fundamentally change the light-matter interaction by making light "ambidextrous" in the optical range, with its magnetic and electric components playing equally important roles. In the past few years, split-ring resonators (SRRs) and their analogues have been the magnetic "meta-atoms" of choice in the microwave and terahertz spectral regions. 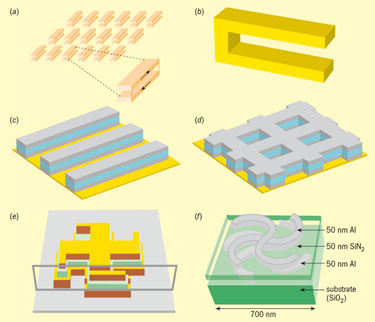 At optical wavelengths, however, other structures like coupled nanorods or nano-strips (figure 2) are preferred because there are intrinsic limits to scaling SRR sizes in order to exhibit a magnetic response in the optical range.

Researchers from Purdue University, US, recently demonstrated structures with a magnetic response across the whole visible spectrum by creating a family of paired-strip samples with varying dimensions. Any controllable optical magnetic responses, whether they have a positive or negative permeability, are important for various implementations such as negative refraction, subwavelength waveguides and antennas, spectral selective filters, total external reflection and electromagnetic cloaking devices. 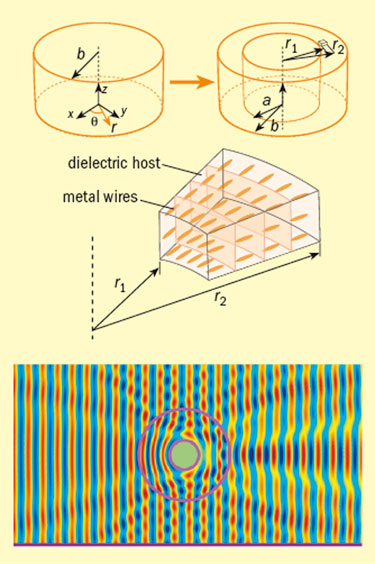 The latter approach can be enabled by metamaterials through careful engineering and adjustment of the individual properties of meta-atoms. A group of researchers from Imperial College London, Purdue University and Duke University, US, recently reported the first theoretical designs and experimental demonstrations of cloaking devices at microwave frequencies and a theoretical design of a non-magnetic optical cloak (see structures in figure 3).

The cloaking approach shown here works by bending light rays around an object and enabling them to emerge on the other side in exactly the same direction as they began, a bit like water flowing around a rock. Metamaterials would allow this to become reality because they can be designed such that the refractive index varies from point to point.

While cloaking devices seem like science fiction, they do have some very real and important applications. They could be used to make military craft invisible or they could shield sensitive medical devices from magnetic fields during magnetic resonance imaging scans.

Currently, proposed designs only work for any single wavelength and not for the entire frequency range of the visible spectrum. However, even this limited function may have its applications. For example, these metamaterial cloaking devices could be used to make soldiers invisible to night-vision goggles or to cloak objects from laser designators used by the military to illuminate a target.

Practical concerns
Despite impressively rapid experimental progress, as with any new technology, there are several design- and fabrication-related issues that need to be solved before optical metamaterials become useful for practical applications. One of the main obstacles remains losses in metal-dielectric-based metamaterials at optical frequencies. This issue may be addressed by introducing gain into the system and several amplification techniques have been proposed.

Another practical concern is the limited useful bandwidth that results from the inherent frequency dependence of the properties of NIMs and, more generally, of any resonance-based metamaterials.

Finally, state-of-the-art optical metamaterials have only been demonstrated in the form of thin films, while bulk structures have still to be realized. While some physical properties such as negative refractive index can be demonstrated using thin films, many practical applications, such as those using guided waves and cloaking require bulk structures.

Challenges in the realization of bulk structures stem from the limitations of the lift-off procedure that is mainly used for the fabrication of metamaterials. However, researchers from Stuttgart University, Germany, recently demonstrated a new layer-by-layer fabrication technique that has the potential to realize bulk structures for optics.

With technological advances such as this being made every year, this relatively new branch of physics is advancing rapidly. It is hard to predict what the first real applications of these fascinating materials will be. One thing is for certain, however: metamaterials will find their way into many areas of science and technology and their uses are limited only by man's imagination.

• This article originally appeared in the May 2008 issue of Optics & Laser Europe magazine.