Swiss hospital carries out first MRI-guided procedure of its type in Europe. 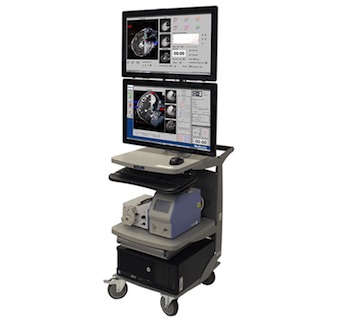 A team at Lausanne University Hospital has successfully treated an epilepsy patient using MRI-guided laser surgery, said to be the first procedure of its kind in Europe.

The treatment involves using MRI to initially image the precise area of affected brain in the patient, and then applying a laser beam to this area via a fiber probe inserted through a small perforated hole in the skull, without the need for open brain surgery.

"This procedure is indicated for patients suffering from drug-resistant epilepsy when the seizure focus has been clearly identified,” commented Philippe Ryvlin, head of the clinical neuroscience department at Lausanne University Hospital.

Although the concept of laser ablation as a treatment for epilepsy patients has been under development for some years, recent improvements in imaging, surgical navigation, and in particular real-time thermal control, have now made a form of the procedure termed laser interstitial thermal therapy (LiTT) an increasingly feasible alternative to drug-based therapies.

Two commercial platforms for LiTT are now available: Visualase from Minnesota-based Medtronic; and NeuroBlate from Monteris Medical, also of Minnesota.

Medtronic announced in April 2018 that the Visualase MRI-guided laser ablation system had received CE-mark European approval for use in neurosugery, having originally received US FDA approval for general use in necrotizing or coagulating soft tissue back in 2007.

Visualase employs a 980 nm diode laser source, and delivers light via an optical fiber and cooling catheter to the desired target areas. A computer workstation, which interfaces with an MRI system, allows real-time visualization and feedback control of the ablation process.

The platform's original developer, Visualase Inc., was founded in 2005 as a spin-off from Texas-based medical device developers BioTex. In 2014 the company was acquired by Medtronic, already an investor in the technology, in an all-cash deal quoted as being worth $105 million.

Medtronic, with a medical device portfolio that also covers cardiac and vascular procedures, diabetes treatments, and restorative therapies, this week reported its results for the first quarter of fiscal 2019. Quarterly revenues remained nearly unchanged compared to Q1 of 2018 at $7.38 billion, although the company noted that stripping out the effects of recent divestitures revealed organic revenue growth of 6.8 percent.

The Visualase platform comes under the company's Brain Therapies business area, which saw quarterly revenues rise by 14.8 percent to $599 million. Visualase was mentioned as being among the products contributing to "strong capital equipment sales" for the business area.

The other LiTT platform, NeuroBlate, is based around a Nd:YAG laser source, and was first used in a Phase I clinical trial assessing its use in ablation of brain tumors in April 2013. Since then Monteris agreed a $10 million loan deal to support sales of the NeuroBlate platform in 2016, and raised $26.6 million in series C venture funding in June 2017.

In October 2017 the company issued Advisory Notices realting to avoidance of possible overheating issues with the laser delivery probe used by the platform. The FDA followed this in March 2018 with a Class I recall relating to the NeuroBlate system, expressing "concerns that the information provided by Monteris has not sufficiently mitigated the risk of unintended probe tip heating."