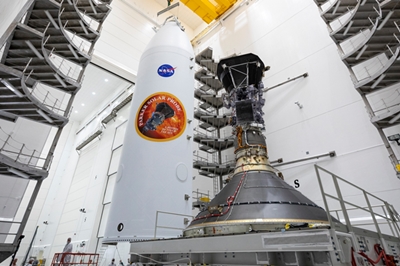 Excuse me while I touch the Sun: the Parker Solar probe ahead of launch

NASA’s much-celebrated Parker Solar Probe is en route to the Sun, its payload featuring some state-of-the-art optical hardware that it is hoped will capture extraordinary images of the solar wind and the Sun’s super-heated corona.

While the overall mission of Parker is to help explain the workings of the solar wind and the creation of the super-heated corona and magnetic field that surrounds the Sun, the “Wide-field Imager for Solar Probe” (WISPR) instrument, a coronagraph telescope operating in the visible spectrum, will snap unprecedented close-ups of the corona and its inner workings.

Those could include photos from inside coronal mass ejections (CMEs) – major releases of plasma and magnetic activity that send radiation spewing into the solar system – as well as the final moments of so-called “Sun grazer” comets.

Other potential targets may include verifying the existence of a dust ring thought by some to encircle the Sun, and even a system of so-called “Vulcanoids” – hypothetical asteroids that some scientists think exist within the orbit of Mercury but are too small and faint to image from Earth against the solar background.

Surprises expected
All of those possibilities are mentioned in a 2014 paper published by the multi-national team that built WISPR, led by Russell Howard and colleagues at the US Naval Research Laboratory (NRL).

In that paper’s conclusions, the team suggested that the instrument may provide all manner of surprises: “All these are just educated guesses based on coronal imaging from 1 AU [one astronomical unit, the distance from the Earth to the Sun],” they say. “The WISPR images probably hold many surprises and this makes [the Parker probe] one of the most exciting space missions ever.”

Previously responsible for telescopes used by the Heliospheric Observatory (SOHO) and NASA STEREO missions, NRL’s imaging capability is built on more than four decades of work advancing the technology to its current status.

According to the NRL, Howard has personally worked on nearly all the laboratory’s coronagraph telescopes. For him, the Parker Solar Probe represents a culmination of decades of work resulting in a step-change of capability with the latest kit.

The sheer proximity of the Parker instrument suite to the Sun will deliver images with unprecedented clarity, he said, all taken from a location at which the resolution of current telescopes runs out.

“What we’re going to achieve is just absolutely amazing,” said Howard in an NRL release accompanying the Parker probe launch. “Stay tuned – we’re going to see stuff that we just never would have imagined, I’m sure.”

Twin-telescope design
WISPR, the only imaging instrument on board the probe, is based around an optical design that uses the spacecraft’s 4.5 inch-thick carbon composite heat shield to block out light from the Sun. That will allow it to capture images of the faintly glowing corona and associated features like streamers, plumes, and energetic CMEs.

In fact, the instrument comprises two monolithic telescopes, each with a dedicated focal plane assembly. The inner and outer telescopes use a five-element and six-element lens, respectively, with the outer design providing a much wider field of view.

That twin-telescope design was adopted despite the initial WISPR concept being based around a single wide-field lens. Other instrumental considerations, specifically the placement of antennae used to sample the solar wind, compromised that simpler approach, resulting in the two separate imaging assemblies and a series of other features to mitigate potential stray-light effects.

Those include customized baffles and occulters to reflect and absorb any residual stray light reflected or diffracted off the edge of the heat shield, or other parts of the spacecraft.

WISPR uses two cameras with radiation-hardened “active pixel sensor” CMOS detectors, said to offer CCD-like performance but with key advantages. “These detectors are used in place of traditional CCDs because they are lighter and use less power,” explains NASA. “They are also less susceptible to effects of radiation damage from cosmic rays and other high-energy particles, which are a big concern close to the Sun.”

Other features include camera lenses made of a radiation-hard BK7, a common type of glass used for space telescopes, and which is also sufficiently hardened against the effects of dust.

Venus fly-bys
Thanks to its launch aboard one of the most powerful rockets used by NASA, the United Launch Alliance Delta IV Heavy, the Parker Solar Probe is currently hurtling towards Venus and will eventually reach a record-breaking speed of 430,000 miles per hour on its final orbits of the Sun, as it moves within 3.8 million miles of the solar surface.

While it will take seven years of Venus-assisted fly-bys to reach that closest of approaches, the WISPR science team will not have to wait too long before the instrument begins collecting data.

Following the first swing past Venus next month, WISPR’s door will be opened ahead of initial commissioning and calibration on the approach to the first solar encounter – just six weeks later.

The probe will then complete 24 orbits around the Sun over the course of its seven-year mission.

NASA video: NRL's Russell Howard, principal investigator for WISPR, on the capabilities of the state-of-the-art telescope: