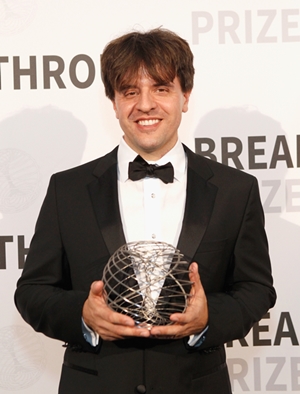 Karl Deisseroth, one of the leading figures in optogenetics and neurophotonics research, has won the latest Berthold Leibinger Zukunftspreis.

Awarded to an individual every two years by the German non-profit foundation set up by the eponymous former Trumpf chief, the Zukunftspreis specifically recognizes “outstanding milestones” in laser technology research, and is intended to complement the more broadly bestowed Innovationspreis.

New field of science
Deisseroth is no stranger to awards ceremonies, his Stanford University biography listing more than 40 different honors. In 2013 he was a joint winner of the “Brain” prize awarded by Denmark’s Brain Research Foundation, and two years later received a high-profile "Breakthrough Prize” in life sciences, thanks to the new foundation backed by Facebook chief Mark Zuckerberg, among others.

The optogenetics researcher, currently the D.H. Chen Professor of Bioengineering and of Psychiatry and Behavioral Sciences, is scheduled to pick up the Leibinger Foundation’s Zukunftspreis (and a €50,000 cash prize) at an awards night being held September 21 in Ditzingen – the German town that is home to Trumpf’s global headquarters.

Deisseroth is a regular speaker at optics and photonics conferences, covering advances in the interaction of light and neurons and the potential to diagnose and treat brain disorders in a completely new way.

In its release announcing Deisseroth as the latest Zukunftspreis winner, the Berthold Leibinger Foundation commented: “On his quest to decipher how the brain works and what malfunctions underly mental illnesses, he finds an understanding of how neural activities express into specific behavior.

“And he develops the new tools that enable him and other researchers to investigate live mammalian brains in completely new manners. Optogenetics is one of the tools for neuroscience that Deisseroth and his students have progressed, developed and implemented to a new level, virtually giving birth to a new field of science defined by this tool.

“Optogenetics combines the findings of light-sensitive bacterial membrane proteins and protein-engineering, genetic techniques that enable targeted implantation of the protein encoding DNA into specific types of neurons and optical laser techniques for highly resolved time and spatial activation, deactivation and reading of neurons in 3D volumes of large neural networks or down to the sub-cellular level.”

Recent work
Among his Stanford team’s most recent papers, published in high-impact journals Nature, Science, and Cell, are revelations on the neural activity involved in the thirst mechanism, cocaine consumption, and reward-seeking.

Deisseroth becomes the seventh winner of the Zukunftspreis, which has been awarded every two years since quantum optics researcher Jeffrey Kimble won the inaugural accolade back in 2006.