SPIE O+P 2018: snapshots of electrons in a new light 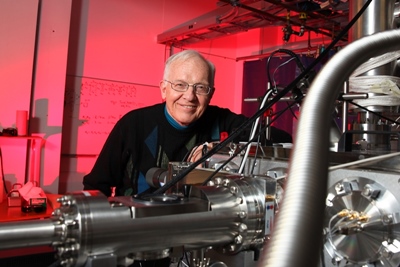 Corkum, tipped as a future Nobel laureate for his work on ultrafast phenomena, this year claimed both the SPIE Gold Medal Award and the UK-based Institute of Physics’ top honor, the Newton Medal and Prize. His work is widely regarded as having opened the door to attosecond science, and is expected by many to transform computing, engineering, and medicine.

Before a standing-room-only crowd including dozens of youthful attendees with backpacks sitting on the carpets in side and rear aisles in the largest hall at the San Diego Convention Center, Corkum impressed his audience with details of the new “tremendous control we have over laser pulses.”

Quantum attena
Equivalent to the time it takes for light to travel just the diameter of a few hydrogen atoms, the duration of an attosecond is unfathomably brief.

But in that time regime is the potential for extraordinary utility. Corkum demonstrated a basic idea of attosecond science by describing how an electron can first be pulled free of its host atom, before returning and colliding with a short burst of energy just where it left off, a phenomenon he refers to as “re-collision.”

The electron smacks back home with the maximum energy available to it. In that action, Corkum said, “you can see everything you need to make an attosecond pulse.”

The electron emits a burst of radiation to the maximum level available. From a quantum perspective, the electron is like a “quantum antenna,” he added, creating a wavepacket. Components of the wavepacket will be “washed back” to the ion that it had briefly departed.

Petahertz possibilities
Corkum described other work, including at Ohio State University, where researchers have found similar re-collision behavior in high harmonics from solids and gases, in terms of energy and momentum.

“The electron keeps wiggling in the solid,” he remarked, adding that the evidence now suggests harmonics in semiconductors are similar to that seen with gases.

Corkum illustrated his account with slides showing pulses moving through a lens system, noting: “We have the spatial, temporal and field resolution to probe electronics or biology. It hasn’t been done, but it is near as a possibility.”

“The generation of these very short light bursts, in attoseconds, allows us to study ultrafast dynamics, even in the solid state. Attosecond research opens the door to development of light electronics, including optical switches, at petahertz speeds - a million times faster than current technology.”