IPG Photonics orders down on 'macroeconomic and geopolitical uncertainty' 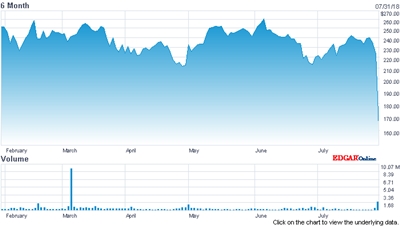 Growing geopolitical and macroeconomic uncertainties have begun to hit the order book of IPG Photonics, the world’s leading vendor of high-power fiber lasers.

Despite posting record-breaking sales of $414 million in the second quarter of the year - up 12 per cent on the same period in 2017 - the company’s CEO and founder Valentin Gapontsev announced that order flows from key customers were off target as demand in recent weeks softened in both Europe and China.

“This more modest year-over-year growth in orders has persisted through July, and we believe is primarily driven by macroeconomic and geopolitical factors rather than competitive dynamics,” he said in an IPG release accompanying the latest results.

Headwinds
“As compared to just a few months ago, the current global macroeconomic trade and geopolitical environment is more uncertain and could remain so,” Gapontsev noted, adding that the recent depreciation of Chinese currency - a response to new US-imposed tariffs – would present another headwind for the company.

The softening demand outlook from major customers has prompted Gapontsev and IPG’s CFO Tim Mammen to moderate their guidance for the full year. They now anticipate revenue growth of approximately 8 per cent on the 2017 total of $1.4 billion - down from their earlier prediction of 10-15 per cent annual growth - with applications in electric vehicle battery welding and laser additive manufacturing expected to weaken significantly in the second half of the year.

IPG’s stock price slumped more than 25 per cent in early trading following the July 31 earnings release and outlook, and at $163 on the Nasdaq index it was down nearly 40 per cent on the high of $260 reached just last month.

On the plus side IPG will itself be able to take advantage of that lower price; its board of directors has just authorized a new $125 million stock repurchase program.

The CEO reported even more rapid growth in sales of “ultra-high-power” CW lasers, defined as delivering a power of 6 kilowatts or more. Revenues jumped sharply in all key sales regions except Japan, where revenues dipped 2 per cent.

“While we are encouraged by the strength in new products and select regions, this growth will only partially offset the more modest outlook in China and Europe,” he said. China currently represents almost exactly half of IPG’s sales (compared with around 20 per cent that are destined for North America), meaning that the weaker Chinese currency will have a significant effect on overall sales figures.

In a conference call with analysts, Gapontsev said he was confident that IPG would be able to maintain or even extend its market share regardless of the apparent macroeconomic weakness – claiming that none of IPG’s competitors were able to match its combination of scale, quality, cost, and lead time.

Mammen added that new and more efficient diode laser pumps would also have a positive effect as they are released in the second half of the year, while IPG’s capital expenditure of $57 million in the latest quarter included $26 million on the purchase of a new facility adjacent to its Oxford, Massachusetts, headquarters.

Raycus attack
A typically forthright Gapontsev said during the analyst call that some major customers had become “afraid” to fix delivery dates in response to the unfolding trade war between the US and China, with Mammen adding that “tariff talk” was having a negative psychological effect.

The CEO was also withering in his assessment of the potential threat posed by the Chinese fiber laser vendor Raycus.

Recently listed on the Shenzhen stock exchange following its initial public offering (IPO) of stock, Raycus claims to have “broken the monopoly of foreign products” in its domestic market – offering on its web site a high-power CW fiber laser with a claimed output of up to 12 kilowatts.

But Gapontsev accused the Chinese firm of “destroying market prices” for fiber lasers, and offering only low-end products of poor quality.

Nevertheless, IPG is maintaining the strategy of pushing down its own average selling prices through manufacturing scale and more efficient diode emitters. Mammen indicated that, if anything, the company would become more aggressive at the lower end of the market – an approach that is partly designed to limit the ability of its would-be competitors to build scale.

UV traction
The CFO also highlighted IPG’s sale of more than $1 million worth of ultraviolet fiber lasers in the latest quarter, thanks to demand in China for applications in consumer electronics manufacturing. That particular area sees IPG looking to compete with the MKS Instruments subsidiary Spectra Physics and its more conventional diode-pumped solid-state lasers.

Despite the uncharacteristically pessimistic tone of the IPG executives, the company was still able to deliver net income of $122 million in the second quarter, equivalent to a 17 per cent rise year-on-year.

And with $1.3 billion in cash and equivalents and minimal debt on its balance sheet, IPG remains in an enviable position – even if it has just shed a quarter of its stock valuation in a single day.

• IPG's outlook also appeared to weigh heavily on the valuations of some of its competitors. In early trading on July 31, nLight's stock shed 20 per cent, giving up most of the gains made since the Portland firm's April 2018 IPO. In addition, II-VI dropped in value by nearly 10 per cent, although Coherent's stock slipped back only marginally ahead of its own financial results release later the same day.