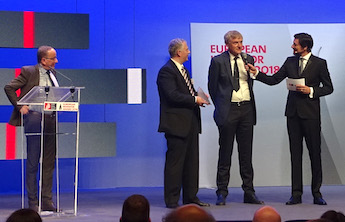 Prominent engineers in the field of extreme ultraviolet lithography (EUVL) have been awarded one of the 2018 European Inventor Awards by the European Patent Office (EPO), in recognition of their work.

The six European Inventor Awards are presented annually by the EPO to recognize outstanding inventors from Europe and around the world who have made an exceptional contribution to social development, technological progress and economic growth.

Vadim Banine, from Dutch photolithography developer ASML, and Erik Loopstra, of ASML and its partner Zeiss, won the Popular Prize award, which is decided by a public vote. The pair have been working in the field for 20 years, and played a major role in the technology's successful arrival as a market-ready process in 2017.

Banine and Loopstra's inventions in EUVL have been instrumental in reducing radiation wavelength by a factor of 14 to 13.5 nanometres, well below the one-time barrier of 193 nanometers, according to the award citation. Global microchip manufacturers are now adopting ASML's EUVL technology for large-scale production.

"The public vote for Erik Loopstra and Vadim Banine honours their contributions to helping chart the future of computer-chip production," said EPO President Benoît Battistelli. "Smaller, more powerful microchips will likely drive developments in fields ranging from consumer electronics to autonomous driving and artificial intelligence. We can see how European advances in chip technology can have a big impact on the digital economy."

Banine, Loopstra and their teams developed an EUVL process which, instead of using direct laser light to etch the silicon, aims a high-powered laser at tiny droplets of tin. Exposed to the laser's heat, the metal droplets melt into plasma and emit radiation in the extreme UV, at a wavelength of 13.5 nanometers. This wavelength is perfect for etching ultra-delicate structures onto silicon.

Achieving this goal required the manufacture of ultra-smooth mirrors with flawless surfaces, for which Zeiss invented an entirely new material, as well as the design of a process able to operate in a vacuum.

In production lines, the technology will not be used to create entire chips, but only for the most detailed and precise layers. These layers will then be assembled onto finished semiconductors along with about 100 so-called "exposure layers," which are created with other types of lithography.

EUVL's impact on chip manufacture may be considerable, although at February's SPIE Advanced Lithography conference the company indicated that the full extent ot the technology's influence over the coming decade remained uncertain.

Speaking at that event, ASML described how EUV tools fitted with the latest laser-powered sources had demonstrated "best-ever productivity levels" of 140 wafers per hour, up from 126 wafers per hour in late 2017 and 104 wafers per hour earlier that year. This is thanks to a new design of the high-power carbon dioxide laser system, that generates EUV radiation in the lithography tool's source chamber when it meets the series of tin droplets.

The next evolution of the EUVL process, currently under development by ASML and Zeiss, will involve high numerical aperture optics, said to be an extension of the existing lithography operation that will enable geometric chip scaling during the next decade. High-NA optics offer a resolution and overlay capability which is 70 per cent better than today’s most advanced EUV systems, according to ASML.

In late 2016 ASML made a €1 billion investment in Carl Zeiss SMT, a semiconductor manufacturing subsidiary of the optics company, specifically as part of its development of High-NA optics for EUVL.