Daniel K. Inouye Solar Telescope should be up and running next year. 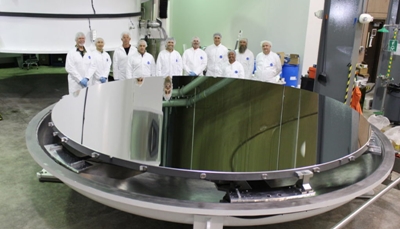 What is set to become the world’s largest telescope for observing solar activity should achieve “first light” next year, with full operations commencing in early 2020.

Based around a 4 meter-diameter primary mirror that was delivered to the summit of Mount Haleakalā on Maui, Hawaii, last year, DKIST will be used to observe the Sun’s corona. That will give scientists new insights into solar physics and a better understanding of how space weather affects satellites, power grids, and other infrastructure.

Rotation milestone
Funded partly as a “shovel-ready” project under the Obama-era American Recovery and Reinvestment Act, DKIST is housed inside a 25 meter-diameter enclosure, at an altitude of 10,000 feet and at a site offering very little haze and excellent “seeing” conditions.

Warner highlighted several recent engineering milestones, and when showing a video clip of the telescope structure rotating through 45 degrees remarked that the achievement represented a “huge day” for the project team.

What the project manager described as “really a big milestone” was actually performed with a substitute mirror blank, rather than the facility’s real primary mirror. The latter is known informally by DKIST staffers as “Elvis” - on account of its occasional departure from the building - and was being coated ahead of its installation.

Once it is installed, “Elvis” will be supported by 144 electromechanical actuators to adjust its structure, compensating for the pull of gravity as it tilts throughout the day.

With the final three DKIST mirrors scheduled to ship to Hawaii by the end of this year, detectors and “first light” instrumentation mostly assembled, and components for wavefront correction starting to arrive, Warner went on to reveal what the engineering team believes to be the key lessons learned during the decade-long build.

Among those key elements are recruitment, and retaining the skill and motivation of the “best and brightest” creative thinkers, problem-solvers. “Don’t try to change personalities; fit jobs to people,” remarked the project manager, adding that to ensure real ownership of the project, it was important to give both authority and responsibilities to lead engineers.

He also stressed the “good enough” mantra, warning against creeping project scopes alongside the danger of “gold-plating” activities unnecessarily, and the importance of providing unambiguous specifications.

Other priorities for prospective telescope-builders should include carrying out as much testing as possible before taking equipment to mountain summits, where every problem becomes multiplied by the difficulty of the location.

Hawaii protests and TMT
Like the Thirty Meter Telescope (TMT) project, DKIST has been subject to some protests by Hawaiian islanders that have threatened to disrupt the facility’s completion. In fact, the primary mirror’s arrival at Mount Haleakalā last August was completed despite attempts by protestors to block its transportation.

Speaking during another session at the Austin conference, TMT’s project manager Gary Sanders said that June 21 would represent a key date, with the Hawaiian Supreme Court set to hear final oral arguments in a case that has delayed construction activity at TMT’s preferred Mauna Kea site since protests and a procedural error back in April 2015.

“We’re optimistic but expecting to have to wait for a few months,” said Sanders, while stressing that plenty of parallel activity for the TMT project has been going on despite that delay. That ongoing activity has included production of more than 200 of the TMT primary mirror’s 574 segments, a series of preliminary design reviews, and a deal with Toptica to provide laser guide star equipment.

And if the Hawaii court does decide against TMT construction, Sanders and colleagues have a contingency plan lined up. The back-up plan is to site the telescope at La Palma in the Canary Islands instead, with a signed agreement ready to be actioned, if and when deemed necessary.

“We do have two options, and could move forward [in La Palma] if the board chooses to,” Sanders told delegates – adding that, for now, Mauna Kea remains the preferred option.