$100M worth of equipment expected to move to the summit of Cerro Pachon over the next year.

Around $100 million worth of equipment destined for the Large Synoptic Survey Telescope (LSST) is set to arrive at the summit of Cerro Pachon in Chile over the next year, as engineers begin to assemble the new observatory.

Speaking at the SPIE Astronomical Telescopes and Instrumentation symposium in Austin, Texas, LSST’s deputy director Beth Willman described an “exciting time” at the construction site, with the latest images showing scaffolding in place to assemble the dome structure that will house the 8.4 meter-diameter primary mirror and a giant camera with a 3.2 billion-pixel sensor.

“It’s about to really get put together,” Willman told delegates in her plenary talk, adding that the primary, secondary, and tertiary mirrors for the telescope were among the key components soon to be making their ascent.

Beth Willman, Deputy Director of the #LSST, shares that after the 10-year survey, there will be 15 petabytes of data gathered.

Once erected, LSST is expected to achieve “system first light” in 2021, before embarking on an unprecedented survey of the night sky that will take advantage of its huge sensor and wide field of view.

Describing the likely output as a “data onslaught”, Willman said that LSST would be able to capture 10 million events per night, and catalog some 6 million orbiting objects in the solar system alone – including potentially hazardous asteroids.

Ultimately, the decade-long survey – slated to begin October 1, 2022 – will catalog an extraordinary 40 billion objects. In doing so, it is expected to generate a colossal 20 terabytes of data every day, and some 15 petabytes overall.

Not surprisingly, the required data management represents a large chunk of the LSST effort and budget. In a subsequent presentation, LSST project manager Victor Krabbendam said that the data management budget of around $150 million represented one-fifth of the total expected spend.

Updating delegates on the details of the site construction, Krabbendam said that after breaking ground on the site four years ago LSST was now “successfully transitioning to reality”, and summarized: “Technical progress is excellent. Challenges and risks remain, but LSST is currently on track for successful completion.” 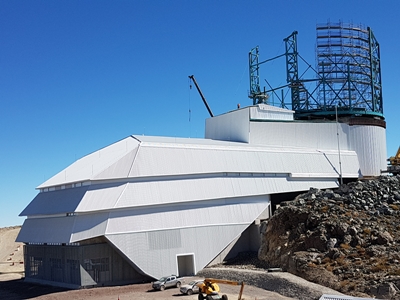 Mirror milestones
Among several forthcoming milestones, he expects the LSST’s main “M1M3” mirror - which combines the primary and tertiary reflective optics – to arrive at the summit site almost exactly a year from now. The giant optical component has been in storage for the past three years, following its fabrication at the University of Arizona.

Meanwhile the 3.4 meter-diameter convex “M2” secondary mirror is nearing completion at contractor Harris Corporation. It’s expected to be finished within two months, and delivered in October.

Of the giant 3-ton camera and its sensor, Krabbendam said that construction was “well on its way”, with engineers currently assembling the 189 individual 4000x4000 pixel CCDs that make up the giant sensor into the required grid pattern.

The camera also features three meter-scale refractive optics made by Ball Aerospace and Thales’ “SESO” optical systems and components division, and despite some minor issues with the optical surfaces Krabbendam said that each was progressing well.

Camera integration is slated to begin later this year, while in October the 300-ton telescope structure should be shipped from its current location in Spain, where it is currently undergoing tests.

Once operational, the telescope will need to move quickly to capture each successive wide-field image. Krabbendam said that the structure would need to shift to each subsequent 3.5-degree snapshot within just five seconds – demanding rapid acceleration to around 20 mph and an extremely stiff structure.

With dome completion expected in early 2019, lifting the three LSST mirrors into position via an 80-ton lift should follow. Other key elements on the way include a hexapod to hold the camera, and installation of a new fiber-optic link to carry all that data away from the summit.

And although the initial site construction has taken three years – one longer than had been planned – Krabbendam said that the project remained on budget, on schedule, and with plenty of money available for contingencies if required to hit the systemic first-light milestone in Q2 of 2021, and the start of the survey in October 2022.