Seemingly unstoppable rise in demand as the fiber laser pioneer is added to the S&P 500 stock index. 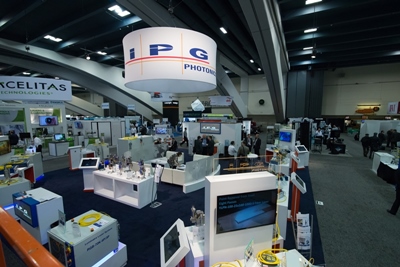 IPG Photonics has posted another record-breaking financial quarter, as demand for the US firm’s high-power fiber lasers shows no sign of abating.

At $360 million, sales in the opening quarter of 2018 rose by 26 per cent year-on-year, while IPG’s highest-ever level of quarterly bookings means that revenues in the second quarter should be in the $400 million-$430 million range.

Combined with favorable changes to US tax law, the persistent ramp in demand also prompted a 42 per cent jump in net income, to $106.3 million, with CEO and founder Valentin Gapontsev saying in response: “The momentum that carried IPG through an outstanding year in 2017 continued in the first quarter of 2018.”

That momentum is attributed largely to rapid growth in demand for lasers in cutting and 3D printing applications, with sales jumping nearly 40 per cent year-on-year in both Europe and Japan.

Gapontsev also pointed out that, despite the “tremendous” increase in unit volumes shipped, IPG has been able to maintain product lead times at just a few weeks. “There is no company that can deliver high-power laser solutions at our scale, quality, cost and lead time,” he told an investor call to discuss the results, adding that the speed of response enabled by IPG’s vertical integration was a “major weapon” against the competition.

12-15 kW migration
The CEO also reported that it was the company’s highest-power offerings that were driving the most rapid growth. “Sales of ultra-high power solutions at six kilowatts and above increased more than 60 per cent year over year, and are approaching 40 per cent of total high-power product sales,” Gapontsev told investors.

“Our largest OEM customers are migrating to higher-power fiber laser cutting solutions at 10 kilowatts, where IPG has a unique solution in the marketplace. A handful are also testing our fiber lasers at 12 and 15 kilowatts, which continue to demonstrate faster cutting speeds and improved productivity for the end user.”

Towards the lower end of the power scale, IPG is seeing solid demand - especially in China - for its new 2 kW rack-mounted laser, which is designed to replace simple punch presses.

Gapontsev also highlighted IPG’s first “consistent revenue” from relatively new ultraviolet fiber lasers, used in marking and engraving applications.” And we continue to see encouraging customer interest and order activity for our new ultrafast picosecond and femtosecond laser families,” he added. “This early interest is across a variety of customers in the US and Europe for many different applications within micro materials processing.”

One area where IPG has seen a dip in demand is for its quasi-CW (QCW) sources, which are generally used in smart phone production. IPG’s CFO Tim Mammen pointed out the cyclical nature of this business, telling investors:

“We benefit from the purchase of QCW lasers used in the production of new smart phone models, with these major redesigns occurring every other year. Because we saw a significant QCW benefit from the smart phone industry last year, we did not expect this to occur again in 2018.”

Political uncertainty
While IPG appears to be firing on all cylinders, Mammen and Gapontsev have not yet changed their expectations for annual sales in 2018 – growth of 10-15 per cent on last year’s total of $1.4 billion.

The executive team indicated that this was partly due to the uncertainties surrounding a potential trade war between the US and China, and the wider political situation.

Responding to an analyst query, Gapontsev said that although IPG is yet to sense any hesitation from major customers, the “unstable” political environment could see things change very quickly.

“We view this as a milestone for our company, reflecting the successful execution of our strategy and our industry-leading financial performance since our initial public offering in 2006,” said the CEO.

• Following the latest update, markets sent IPG’s stock up nearly 10 per cent, and back towards the all-time high of $252 reached as markets topped out in January this year. On May 1, IPG closed at $233.29, equivalent to a market capitalization of around $12.5 billion.