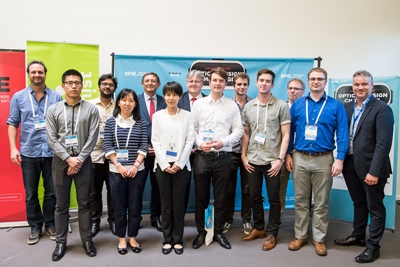 In all, nine students walked away with prizes from the event, dedicated to optical developments for augmented, virtual, and mixed reality (AR/VR/MR) applications. Shi, a member of Federico Capasso’s research group at Harvard, claimed the top score in the competition, for her presentation on the potential for metamaterials to improve the AR/VR experience.

The competition is the brainchild of Microsoft’s chief optical architect, Bernard Kress, and was judged by representatives from a “who’s who” of the AR/VR sector – including, among others, Google, Huawei, Facebook-owned Oculus, Nvidia, Zeiss, and Jenoptik.

Describing the competition as an “amazing experience”, Kress added. “Its success was due to the quality of the student designs entries aimed at solving practical industrial problems in the exciting fields of VR and AR, and also to the commitment of the industrial sponsors.”

He also praised SPIE’s role in the event’s organization, particularly for finding a way to bring students and pioneering industrial technology companies together, to solve real problems with cutting-edge optics.

“I was very glad to see student entries from all over the world, including Europe, China, the Middle East, US and Russia,” Kress continued. “Also, the impressive number of female optical engineers participating in the challenge - with the first prize going to a female researcher - was very uplifting, and shows that new exciting research fields such as VR and AR have the power to attract a very diverse, inclusive and excelling group of optical engineering students.

“Eventually, such exciting new initiatives have the power to transform the gender representation and revolutionize the traditional field of optics and photonics.”

Conference debut
The competition formed part of the “Digital Optics for Immersive Displays” conference. Held for the first time at SPIE Photonics Europe this year, it proved to be one of the best-attended conference strands at the event.