Multi-purpose QCL gas spectrometers and vital sign monitors inside MRI scanners among the optical technologies transferring out of European labs. 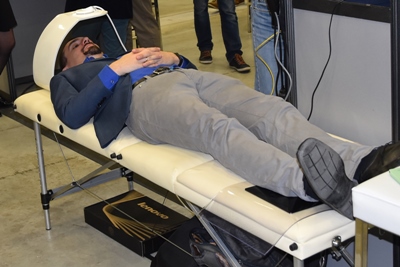 The SPIE Photonics Europe industry exhibition saw representatives from 18 research projects showcase their latest work in the Photonics Innovation Village, with several of them in the process of spinning out new startup companies.

Several of the European groups taking part in the Strasbourg event showed off prototype equipment, demonstrating applications of novel technologies including metamaterials, dual-color quantum cascade lasers (QCLs), and an optical biopsy tool based on the complex polarization effects of biological tissue.

QCL sensor startup
Appearing for the first time in public was a prototype quantum cascade laser (QCL) absorption spectrometer built by the new Swiss company, MIRO Analytical Technologies. Oleg Aseev and Morten Hundt established MIRO as a spin-out from the Swiss materials science and technology laboratory Empa just a couple of months ago, emerging from the same research group that span out the mid-infrared spectroscopy firm IRSweep recently.

Based around three different dual-wavelength QCLs, the MIRO kit is capable of monitoring the concentrations of eight different gases and pollutants simultaneously – including direct measurement of NO2, N2O, and ammonia (NH3) to well below the parts-per-billion level.

At the Strasbourg event, the kit developed by the MIRO team was shown monitoring changes in carbon dioxide levels in the exhibit hall, with a claimed detection limit of 0.2 parts per billion.

Aseev and Hundt, who are already seeking investment of around CHF1 million and looking towards the key step of product certification, say that their 20-kilo, rack-sized QCL system could potentially replace the multitude of different sensors currently used in pollution monitoring.

The three emitter chips at the heart of the system, developed in collaboration with QCL pioneer Jérôme Faist, each provide two output wavelengths in the 6-10 µm wavelength range. Alongside applications in climate science and air quality monitoring, the MIRO team sees potential uses in industry and security.

Metamaterial gas sensor
Gas sensing was also the theme of the King’s College London (KCL) team’s Innovation Village display, albeit with completely new forms of sensors based on optical metamaterials.

Under development within Anatoly Zayat’s research group at KCL, the potentially inexpensive and robust sensor was shown detecting hydrogen gas. Based around a simple LED source and photodetector, it takes advantage of the change in refractive index when the palladium nanorods that make up the metamaterial react with hydrogen gas.

PhD student Luke Nicholls from the team says that hydrogen gas at a concentration of 2 per cent in air produces a 40 per cent change in light transmission, and that concentrations down to 0.1 per cent have been demonstrated – with further room for improvement.

Widely used in the chemicals industry, hydrogen is explosive at relatively low concentrations and the metamaterial approach could provide a sensitive and spark-free alternative to current electronic sensors.

The KCL team believes that production of the nanorod structures could be readily scaled up without the need for expensive specialist equipment, suggesting that the sensors could be produced relatively cheaply in volume. Having patented the approach, they will now look to miniaturize the sensor, light source, and detector into a small package, and are open to future licensing agreements.

FBG sensors for MRI scanners
Also catching the attention of Photonics Innovation Village visitors (see image above) was a group from Warsaw University of Technology in Poland, whose fiber Bragg grating (FBG) sensors can be used to monitor a hospital patient’s vital signs inside a magnetic resonance imaging (MRI) scanner – where electronic devices cannot be used.

In combination with a video camera used to monitor heart rate via subtle changes in face coloration, the approach provides a way to measure respiration rate that would be imperceptible to patients.

Krzysztof Anders and colleagues from the Institute of Microelectronics and Optoelectronics (IMiO) in Warsaw have developed the approach under the “OPTO-SPARE” project, whose €1.5 million budget was co-funded by the Polish National Centre for Research and Development.

Their Strasbourg demonstration generated live data from a bed fitted with FBG sensor pads and overhead camera, indicative of the technology’s potential incorporation within an MRI scanner.

Anders said that an initial 100-person clinical trial has shown promising results, matching the performance of finger-worn pulse oximeters. He says that the FBG and camera approach would offer patients a more comfortable experience, and be advantageous in some trauma cases.

The next steps for the Warsaw team include developing much more compact sensors based around photonic integrated circuit (PIC) designs, with a view to spinning out the technology the form of a startup company towards the end of 2018.

Polarimetry diagnostics
Also looking towards a commercial future is a group from the local University of Strasbourg, with their development of a spectro-polarimetric imager for rapid cancer screening.

Unusually, the hand-held tool developed by the Dermapol project team exploits the effects that different tissue types have on the polarization of light to identify dangerous melanoma skin cancers, and other types of tumor.

Based around two sets of four polarizer components, the core of the spectro-polarimetric tool is said to be adaptable to any optical device, but is seen as having its most likely impact in dermatology applications.

The version on view during the SPIE Photonics Europe exhibition featured a 5 cm-diameter monitoring area, and is expected to be capable of delivering a binary in vivo assessment of a suspect skin lesion within a minute, to a depth of 1 cm.

Aside from the melanoma application, the equipment has been tested on ex vivo glioblastoma samples from a mouse brain, and it is thought that the technology could be adapted to an endoscopic form – although the polarization effects would be significantly more complex to analyze.

With a dedicated parametric model for biological tissue effects on light polarization recently completed, and an initial clinical trial scheduled for the next few months, Marc Beekenkamp from the Alsace region’s “Conectus” technology transfer unit is working with the Dermapol team to create a startup company.

• For details of all 18 participants in the Photonics Innovation Village, click here.