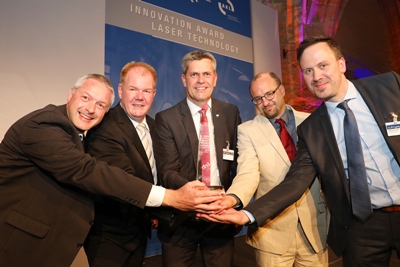 A team from the high-power diode laser system vendor Laserline has scooped first prize in the biennial Innovation Award Laser Technology - thanks to its development of a multi-spot module to improve laser-based brazing techniques.

Axel Luft, Laserline’s sales manager for the global automotive market, picked up the award and a prize of €10,000 on the team’s behalf during last week’s Arbeitskreis Lasertechnik (AKL) event, held as usual in Aachen, home city of the Fraunhofer Institute for Laser Technology (ILT).

In 2016, Laserline, Volkswagen, and Scansonic assembled a triple-spot module including an optical camera system and integrated robot control for HDG brazing on the auto maker’s series production line.

They explain that the module offers the advantage of continuously adjustable power distribution between the main spot and the front spots, as well as between the leading front spots. “Therefore, it is now also possible to switch off front spots, for example in flexible lines for cars with EG (electro-galvanized) coating, or to adjust the space between the front spots,” added the team, which has now applied the same approach to aluminum welding.

“The technology is bound to penetrate a large number of manufacturing processes, and thereby adds a new and cost-effective member to the family of beam-forming optical systems for material processing with diode lasers in industrial mass production,” noted a release from the AKL organizers.

Picosecond printing
Luft and his co-workers beat a German consortium featuring LIMO, Edgewave, Schepers, ILT, and led by printing and finishing firm Saueressig, into second place. They had developed a “multi-parallel” ultrafast laser system capable of machining large-area parts – typically a weakness of the high-precision approach.

The system is based on a high-efficiency (>90%) multi-spot diffractive optical element (DOE) and a multi-channel acousto-optic modulator. That setup provides for multiple picosecond-pulsed laser beams, machining with individual beam switching, and modulation at a data rate of 6 MHz.

Integrated within an ultra-high-precision cylinder engraving system, 16 spots were generated and synchronized with a precision better than 2 µm, and a beam delivery positional precision of +/- 200 nm.

“This system has been realized and industrially integrated in a commercial roller engraving system for the manufacturing of high-precision embossing rolls,” states the team, which was represented by Saueressig’s Gerald Jenke at the award ceremony.

States the team: “The RAIO DSS solution has been initially developed and commercialized on the basis of customized laser hardening workstations for different car engine components with convoluted geometry such as crankshafts, new-technology camshafts and different types of powertrain gears, but is rapidly developing to provide innovative solutions for other laser processing applications.”