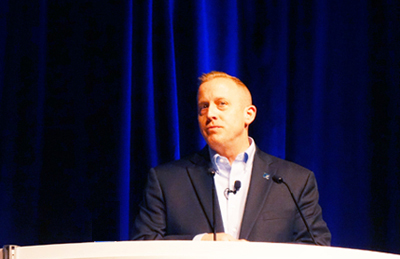 Morley Stone, Chief Technology Officer at the US Air Force Research Laboratory, opened the defense plenaries with his talk entitled “Reflections of a Century, Projections for the Future”.

As a primary adviser to the AFRL commander, Stone is responsible for assisting with the planning and execution of the Air Force’s $2.1 billion science and technology program and an additional $2.3 billion of customer-funded R&D.

He reviewed some of the key AFRL accomplishments to date, such as electro-optical, infrared and radio frequency sensing and imaging, laser radar and precision munitions.

Stone then identified certain photonics technologies that he said would be needed for the US military to “maintain its technological superiority” in areas such as autonomy, human-machine teaming, and directed energy projection and protection.

Having noted that the DCS conference host SPIE and its members – “which include numerous Air Force and DoD scientific and technical professionals” – have played a key enabling role in assisting with many of defense-related photonics accomplishments over the 100 year lifetime of the Air Force Research Laboratory, Stone focused on four technology areas that require further development. These are: synthetic aperture laser radar; infrared imaging and sensing; precision-guided munitions; and sensors for human performance.

“The Achilles heel of synthetic aperture laser radar has been its resolution. If we can improve this then we can improve our critical mission combat ID performance.” Addressing potential research and development providers who might be in the audience, Stone added that it would also be necessary also to implement any new resolution capabilities into manufacturable technology.

Stone also stressed the importance to the defense-photonics sector of the relatively new research institute AIM Photonics in Rochester, NY, and its capabilities to develop novel photonics materials, semiconductors and processing techniques to enable smaller and high performance devices required by the military.

Considering progress in precision-guided munitions, based on a variety of improving optical systems, Stone gave a brief history of how USAF bombing targeting had been significantly improved since the Second World War, through other conflicts such as Vietnam, to more recent theaters of conflict.

Sensing for human performance monitoring as applied to military situations is the integration of body-worn bio-sensing technologies with a particular human activity, whether in the combat theater or in maintenance applications. Stone asked, “How can we best integrate the human-centric control loop with a military system?”

Various photonics-based sensing technologies, such as for monitoring blood pressure, sweat composition and blood oxygen levels, are now used to improve both performance and safety of personnel in a variety of situations, including treatment of injured warfighters and keeping maintenance operatives safe while they performing hazardous jobs like cleaning aircraft fuel tanks.

He commented, “These systems are allowing us to approach the human no longer as a separate black box but as a connected component integrated into an overall managed system.”